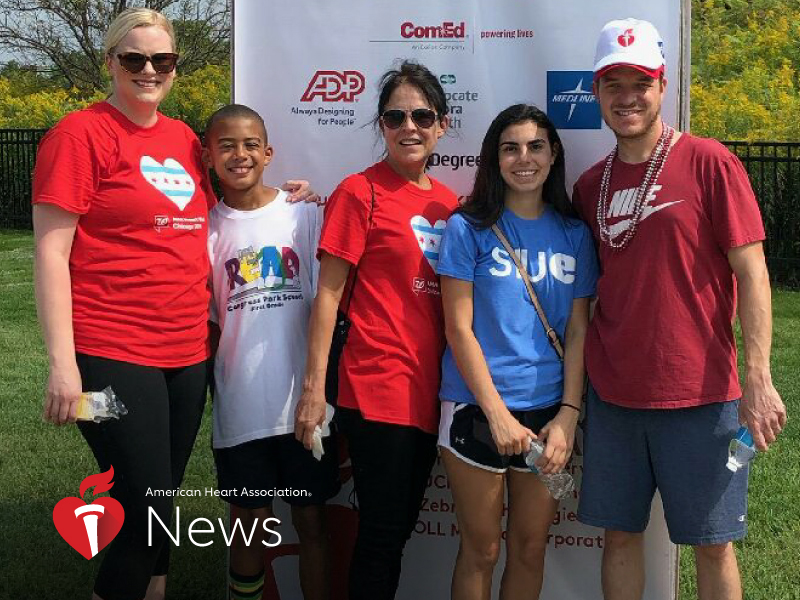 WEDNESDAY, March 11, 2020 (American Heart Association News) -- When Trent Paul Arnold was 24 and got worn out walking a short distance at work, it was a "big red flag" that something wasn't right.

"Gradually, I just kept losing more and more stamina," he said. His mother, Laura Arnold, believed he was suffering from allergies.

By the time Trent visited his doctor, breathing was difficult. His physician immediately sent him to a local hospital in Effingham, Illinois, and he was admitted to the intensive care unit.

"My body was shutting down," Trent said.

After a night in the hospital, Trent's condition worsened. He was transferred to a larger hospital in Springfield.

Doctors dug into his family's medical history, ran a battery of tests and explored the possibility he had a hole in his heart. Nothing was conclusive.

Trent continued to decline. His kidneys were failing. Getting up from his hospital bed, he fell headfirst into a wall after the left side of his body went numb. He was having a stroke.

After receiving a drug to break up the clot, Trent was transferred to yet another Springfield hospital and put under the care of a neurologist.

"That's when I started getting very scared," she said. "As his mother, I felt like if he didn't get some help pretty quick, he was going to pass away."

Laura arranged to have Trent transferred yet again, this time to the University of Chicago Hospital. Doctors there said he was suffering from acute heart failure.

The Chicago doctors quickly focused on getting his heart working again, even as the cause of the heart failure remained unknown.

They tried medication, unsuccessfully. Trent needed a left ventricular assist device, a mechanical heart pump that's surgically implanted. After clearing some medical hurdles, Trent got the LVAD – and got to go home.

The LVAD required a constant power supply and Trent needed his mother's help in taking care of himself. Trent was able to move around a good deal and live his life, with some restrictions.

But it became clear Trent needed a heart transplant. He dreaded the idea of taking post-transplant drugs the rest of his life and resisted getting on the transplant waiting list. Finally, his doctor sternly told him he had to make a decision and gave him a deadline. Trent joined the transplant list.

More than 16 months after his initial hospitalization, Trent's doctor called from Chicago on Dec. 6, 2016, with good news: He had a donor heart.

Trent remembers the doctor telling him, "It's a wonderful heart."

Trent was speechless. Laura had never seen him as calm as he was the next few hours traveling to Chicago.

The family had tried for months to keep Trent's plight a family matter and away from social media or prayer chains so as not to further frighten him. Now, a friend at the local radio station wished him well on the air and his phone was "blowing up," he said. He didn't mind.

Trent's transplant surgery lasted 16 hours. The day after surgery he was walking the hospital halls with the help of his father, Todd Arnold, and his brothers.

A couple of weeks later he was discharged from the hospital, and a month after that he left Chicago and headed home. His new life was beginning.

Today, Trent is 29 and feeling good. Although doctors never found the root cause of his heart problems, he's OK with the mystery. He had no lasting effects from the stroke, and his new heart is working well. He has a job building computer desks and enjoys playing in golf leagues.

"It's just gradually getting better and better," he said.

Trent recently wrote a letter to the unidentified heart donor's family expressing his gratitude and gave it to his nurse.

"We hope that the family will be receptive to it," Laura said. "To accept a gift like that, I feel like it was our responsibility to try to make contact with them."

Laura suggests families in similar medical situations advocate firmly for their loved one. "You have to ask questions," she said.

Trent's advice is to listen to your doctor.

"Do the most that you can to work with them," he said, and "hang in there."