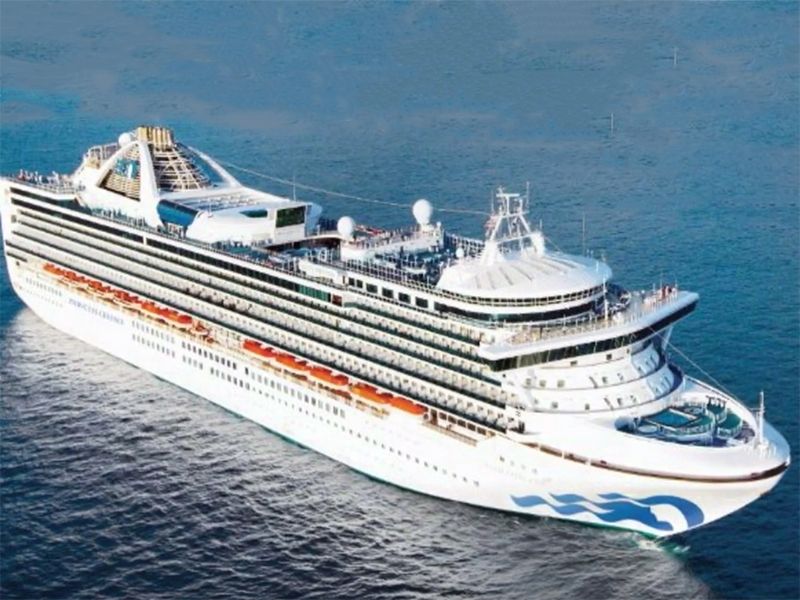 The U.S. Coast Guard delivered the kits by helicopter Thursday to the Grand Princess, which is anchored off the coast of San Francisco. According to CNN, 45 tests have been ordered. Sixty-two passengers have been quarantined in their cabins because they were on the first leg of the cruise with a California man who died of COVID-19 on Wednesday. At least 11 passengers and 10 crew members are showing symptoms.

Roughly 3,500 passengers and crew are on board the ship, which was returning to San Francisco from Hawaii, the second leg of the cruise, CNN reported. California health officials said Thursday that the state now has 60 confirmed coronavirus cases.

The California death involved a 70-year-old man from Placer County who had underlying health conditions and had traveled on the Grand Princess from San Francisco to Mexico in February, CNN reported. It is the first U.S. coronavirus death reported outside Washington state.

"Cruise ships are posing probably one of the biggest challenges that we are seeing in this outbreak," Dr. Jeanne Marrazzo, infectious diseases director at the University of Alabama, told CNN. "We know these cruise ships are essentially ... we've been calling them incubators, they are incredibly very healthy environments for the pathogens that we're talking about."

Meanwhile, more than 2,500 New Yorkers have been asked to self-quarantine as more cases were reported in the New York City area. New York now has a total of 22 cases, CNN reported.

And Maryland on Thursday declared a state of emergency as it reported its first three cases of coronavirus. All three cases were travel-related, a couple in their 70s and a 50-year-old woman, the Washington Post reported.

Reacting to the crisis, the U.S. Congress passed an $8.3 billion coronavirus package on Thursday, the Associated Press reported. It's headed for President Donald Trump's desk, who has said he will sign the funding bill.

Vice President Mike Pence said earlier this week that all restrictions on coronavirus testing would be lifted and the costs of testing would be covered by all forms of health insurance, but he conceded Thursday that ""we don't have enough tests today to meet what we anticipate will be the demand going forward," the New York Times reported.

Meanwhile, the World Health Organization released a troubling new statistic on the coronavirus.

The estimate most likely takes into account the growing number of infections being recorded outside China, mostly in South Korea, Iran and Italy, the Times reported.

"While many people globally have built up immunity to seasonal flu strains, COVID-19 is a new virus to which no one has immunity," meaning more people can be infected and some will suffer severe illnesses, Tedros explained. The coronavirus does not transmit as efficiently as the flu but "causes more severe disease," he added.

Prior estimates, including a study of more than 1,100 cases in China, had put the death rate at 1.4 percent of cases. But Fauci and other experts have also suggested that the death rate may be lower than current estimates, because they do not take into account the number of milder cases of COVID-19 that do not get reported.

Washington state continued to contend with an outbreak involving the Life Care Center nursing home in the town of Kirkland, CNN reported. State officials said Thursday that a total of 13 people have died from COVID-19 infection, with most either living at or connected with the nursing home.

According to the Washington state health department's website, at least 70 cases have been reported so far in the state, but more cases are expected.

While most people with robust immune systems appear to recover from COVID-19, frail and elderly nursing home residents may be at particular danger, experts noted.

Florida, which has reported four cases, has declared a state of emergency, CNN reported.

Scientists say that genetic analysis of the virus in Washington State suggests the coronavirus may have been spreading within the community for as long as six weeks before the first case was detected, the Times reported.

Cases of infection have now been spotted in 88 countries and on every continent except Antarctica, according to WHO.

As of Friday, WHO has reported more than 98,202 cases of coronavirus worldwide, including 3,381 deaths, the vast majority of which have occurred in China, where the outbreak began.

"This is not a drill," Dr. Tedros Adhanom Ghebreyesus, director general of the World Health Organization, said Thursday. "This is not a time for excuses. This is a time for pulling out all the stops."

South Korea and Iran are each battling major outbreaks of COVID-19. In Europe, a similar fight is raging in Italy, even as new cases were recorded in other European countries, the Times reported. In Japan, a state of emergency has been declared in a northern province because of the growing number of coronavirus cases there, the AP reported. Japan has also taken the unusual step of closing all schools for the month of March to protect children.