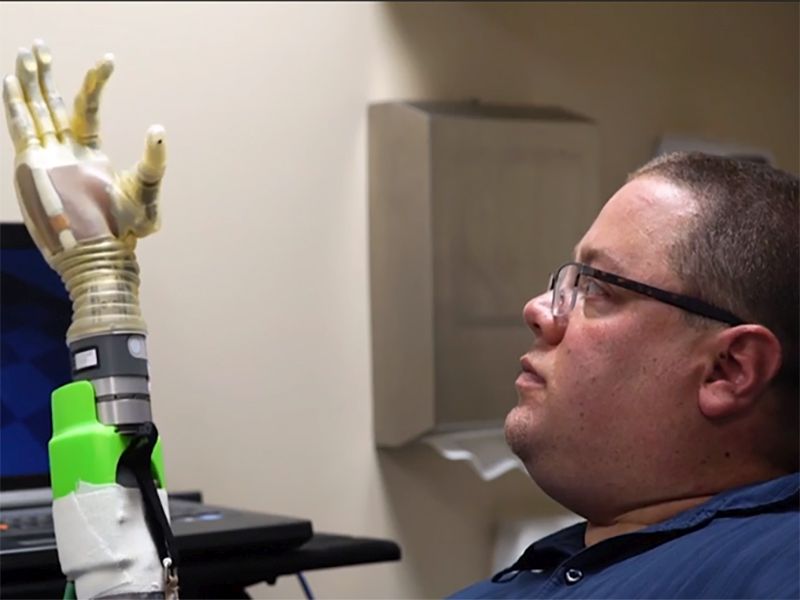 WEDNESDAY, March 4, 2020 (HealthDay News) -- A brain-controlled robotic arm gives users precise hand control that enables them to do more complicated things intuitively than they could with a conventional prosthetic, researchers say.

"It's like you have a hand again," said study participant Joe Hamilton, who lost his arm in a fireworks accident in 2013. "You can pretty much do anything you can do with a real hand with that hand. It brings you back to a sense of normalcy."

According to the University of Michigan team behind the technology, the new hand uses the patient's own muscle tissue to amplify normally faint signals from arm nerves, pumping them up to a much higher level.

That application in signaling allows users to achieve real-time, intuitive, finger-level control of the artificial limb.

"You can make a prosthetic hand do a lot of things, but that doesn't mean that the person is intuitively controlling it," explained research co-leader Cindy Chestek, an associate professor of biomedical engineering at the university. "The difference is when it works on the first try, just by thinking about it, and that's what our approach offers.

"This worked the very first time we tried it," Chestek said in a university news release. "There's no learning for the participants. All of the learning happens in our algorithms. That's different from other approaches."

The findings are in a paper published March 4 in the journal Science Translational Medicine, which described the results of four people who tested out the new Mobius Bionics LUKE arm.

Participants were quickly able to pick up blocks with a pincer grasp; move their thumb in a continuous motion (rather than being limited to two positions); lift ball-like objects, and even play a version of Rock, Paper, Scissors called Rock, Paper, Pliers.

Patient Karen Sussex, of Jackson, Mich., was one participant. In a university video, she called the new device "a really good step into the future, a really good way to move forward, for not only for me but for other people."

"We have developed a technique to provide individual finger control of prosthetic devices using the nerves in a patient's residual limb," he said. "With it, we have been able to provide some of the most advanced prosthetic control that the world has seen."

A clinical trial is ongoing and the researchers are seeking new participants.

"So many times, the things we do in a research lab add to the knowledge in the field, but you never actually get a chance to see how that impacts a person," Cederna said. "When you can sit and watch one person with a prosthetic device do something that was unthinkable 10 years ago, it is so gratifying. I'm so happy for our participants, and even more happy for all the people in the future that this will help."

For Hamilton, the future looks a bit brighter.

"It brought back into my mind the thought of, well, if I had something like this I could actually be out working, without risking hurting myself," he said.

The University of Michigan put together this video further explaining the technology: