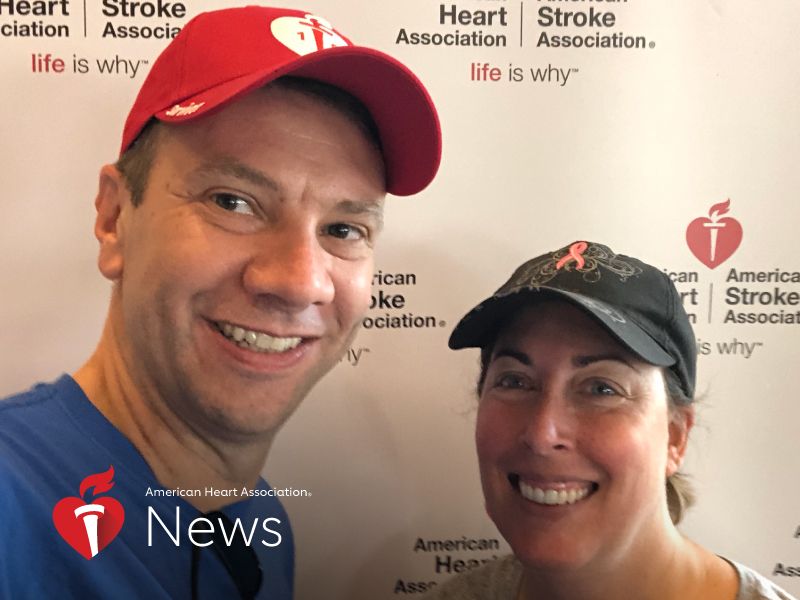 TUESDAY, Feb. 18, 2020 (American Heart Association News) -- One Sunday in 2016, Dwight Tschetter felt lightheaded and lost consciousness. Paramedics rushed him to the hospital. At 67, he had a stroke that paralyzed his whole body.

"It was a really difficult situation," said his son, Jason Tschetter. "We were torn on what Dad would want to do. … We watched him slip away over several days. It was a wake-up call for all of us."

Eventually, this tragic time would become a gift from father to son and grandsons.

Jason, who was in his early 40s, had been experiencing headaches. After his father died, he went to his family doctor, who agreed what happened to his father warranted further testing.

An MRI revealed unusual vascular structures in his head, similar to what was seen in his father after his stroke. A CT scan later identified a life-threatening aortic aneurysm.

Jason, who lives in the Minneapolis area, traveled in April 2018 to the Mayo Clinic in Rochester, Minnesota, where cardiologist Dr. Heidi Connolly warned that he needed immediate surgery. His aorta – the main artery that carries blood from the heart to the rest of the body – was twice the size it should have been. If his aortic aneurysm ruptured, it would likely be fatal.

Feeling like he had a "ticking time bomb," Jason underwent open-heart surgery to repair the aneurysm five days later.

Now 45, he is back to enjoying life with his wife, Gina, and doing all the things he's accustomed to, including running.

"I consider myself fully recovered," he said.

Jason decided after the surgery to have genetic testing. He was diagnosed with Loeys-Dietz syndrome, a hereditary connective tissue disorder often characterized by enlargement of the aorta.

His diagnosis and treatment encouraged younger brother, Lee Tschetter, to get screened for similar risks. Lee was diagnosed with a similar aortic aneurysm and underwent the same procedure as Jason by the same team of experts.

"It was incredibly helpful talking with a survivor," Lee said. "It actually gave me a lot of information and confidence that I was going to be fine."

Jason suggested Lee take care of routine tasks in advance, such as preparing his finances and even getting a haircut, which helped with daily duties and the post-surgery strain on Lee's wife while he recovered.

Now 39, Lee hasn't had genetic testing to confirm he has Loeys-Dietz syndrome, but he's had many of the same symptoms as Jason.

Meanwhile, Jason's son, Jacob, had a baseline screening of his aorta and other major arteries at age 18 based on the family history. His doctors will track these risks over time to ensure he can maintain a normal and healthy life.

Today, Jason and Lee urge others to ask about their own family's medical history. Jason considers his father's stroke to be a lasting gift to the brothers and to future generations because it led them to uncover risks they otherwise never would have been able to take control of.

"If not for Dad's stroke and everything we went through with Dad, we never would have found it until one of us had our aorta rupture," Jason said.

He encourages people to research and be an advocate when seeking a diagnosis and medical care.

"Men, in particular, can be reluctant to talk to their doctor, but they need to speak up," he said. "Take what you understand and ask questions. Be thoughtful. Be prepared. Partner with your doctor."