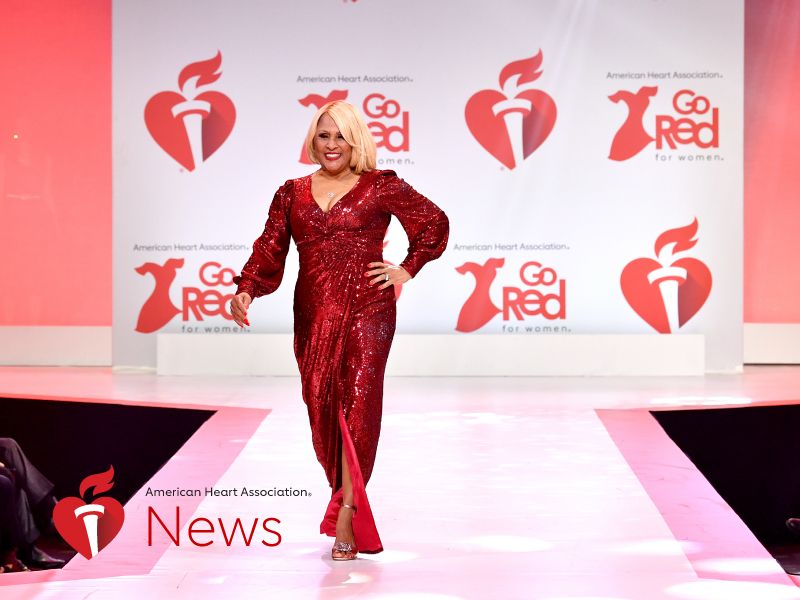 THURSDAY, Feb. 13, 2020 (American Heart Association News) -- A year after becoming a member of the Rock & Roll Hall of Fame, Darlene Love woke up with a terrible headache and stomachache hours before a performance on the Jersey Shore.

Love refused to cancel. Aided by some aspirin her husband insisted she chew, she made it through the 90-minute concert, even posing for pictures and signing autographs afterward.

Only later did she learn she was having a heart attack. And only now, nearly eight years later, is Love revealing the full story for the first time.

Love said she's always wanted to share the details in hopes of helping others learn the warning signs of a heart attack and how to respond. She didn't because a former manager said the revelation might hurt her career.

The public celebration of her survival began last week when Love took part in the American Heart Association's Go Red for Women Red Dress Collection fashion show. The word "survivor" shined in the background as she walked the catwalk.

Love is best known as the voice behind the 1960s hit "He's a Rebel" and the holiday standard known as "Christmas (Baby Please Come Home)." Now 78, she's remained in the spotlight through concerts, movies, Broadway performances and 28 straight years of singing her Christmas classic on David Letterman's show. In 2014, the Academy Award for best documentary feature went to "20 Feet From Stardom," a film about talented, often-overshadowed backup singers such as her. Her story was so prominent that she was among those invited on stage to accept the Oscar.

At that point, she already was a survivor.

In July 2012, word went out that Love suffered a minor heart attack before a show in Asbury Park, New Jersey, and performed anyway. What actually happened was more serious.

The day of the show, Love woke up with nausea and diarrhea. She took various medicines targeting her symptoms. But she didn't get much relief until her husband, Alton Allison, stopped at a convenience store on the way to her concert. He came out with aspirin, something she never took.

"He insisted I take it and chew it," she said. "In five minutes, my stomachache was gone. I ask him all the time why he did that. He finally told me about a year ago that he figured in his heart that I might be having a heart attack."

The next day, Love visited her longtime primary care physician. As he looked over test results, heard her describe her symptoms and factored in her family history (both her parents had heart attacks), he sent her to a cardiologist.

Following a treadmill stress test, the cardiologist said, "Tell your husband to take you home, get some clothes and meet me at the hospital at 10. I'll be operating at 12."

"But I'm not in pain," she protested.

Love received two stents. She left the hospital on her 71st birthday and soon began rehabilitation.

Already a healthy eater, she became even more diligent, eliminating things like candy and sweetened beverages. She continued seeing her doctors regularly and began taking medicine to control her cholesterol.

"I do whatever my doctor says," she said. "I want to do whatever I can to make sure I don't have another heart attack."

A lifelong athlete, Love had been a regular in a kickboxing class taught by a woman who is such a close friend that Love calls her "my daughter." After the heart attack, Love's friend asked for a doctor's note before letting her return to the class.

"She was not kidding," Love said. "I had to bring in a note with his heading on it."

Love's heart story is unique because she did not have the typical warning signs, such as chest pain or a shooting pain down the arm.