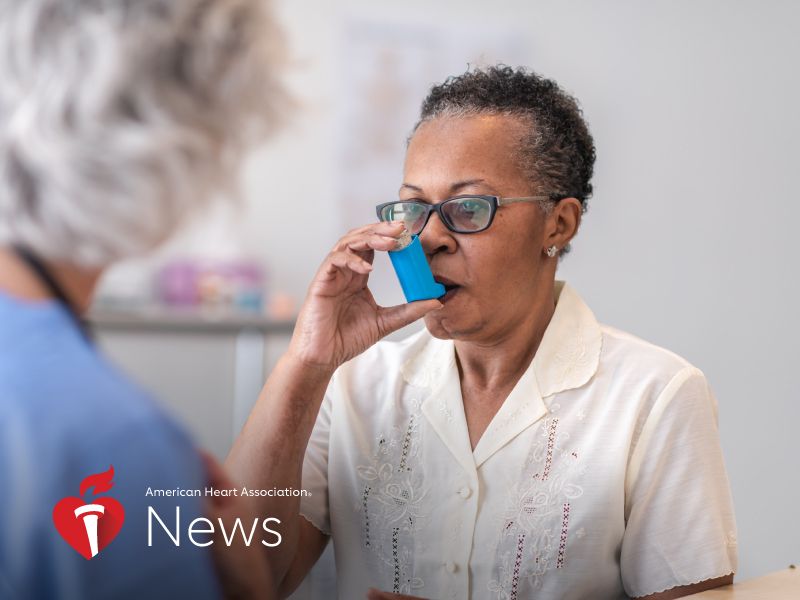 The study used data collected on 6,615 people in six areas around the country who were followed for nearly 13 years. When the study started, none of the participants had heart disease. Researchers concluded that the 150 participants with persistent asthma – those who required medication daily to control their condition – were more likely to be diagnosed with AFib than those without asthma.

Inflammation is a risk factor for both asthma and AFib, and the study found people with persistent asthma had the highest levels of inflammation. But the research also suggests there may be more than inflammation connecting asthma to an irregular heartbeat.

"We initially suspected that the link between asthma and atrial fibrillation may be explained by high levels of common inflammation markers in the blood at the baseline of the study," said study author Dr. Matthew Tattersall, an assistant professor of cardiovascular medicine at the University of Wisconsin in Madison. "These inflammation markers are higher in asthmatics and independently predict atrial fibrillation."

But when he and his colleagues adjusted for those inflammation blood markers, the relationship between asthma and AFib did not significantly change, Tattersall said. That led them to believe "there may be specific unique patterns of inflammation not identified or even other non-inflammatory pathways that may be driving an increased risk."

Previous studies done in other countries also have found a link between asthma and AFib. One study in Norway, with 54,567 adults, found having asthma was associated with a 38% increased risk of AFib.

The new study is the first in the U.S., according to study authors, and the first to include a racially diverse group of people; 27% of participants were African American, 12% Chinese and 22% Hispanic. The research was published Tuesday in the American Heart Association journal Circulation: Arrhythmia and Electrophysiology.

At least 5.2 million Americans are living with atrial fibrillation. The condition is marked by a quivering or irregular heartbeat called an arrhythmia. It can cause heart failure and other heart-related complications, as well as blood clots. If a clot leaves the heart and travels to the brain, it can cause a stroke.

People with untreated AFib are nearly five times more likely to have a stroke than those who do not have this heart problem.

Over 25 million Americans have asthma, a chronic disease caused by inflammation in the bronchial tubes, or airways, in the lungs. People with persistent asthma are prescribed daily controller medications to keep their airways from tightening up and prevent coughing, wheezing, shortness of breath or chest tightness.

Patients and doctors need to know about the association between asthma and AFib, said Dr. Marc Miller, a cardiac electrophysiologist and an assistant professor of cardiology at Icahn School of Medicine at Mount Sinai in New York City. But he cautioned the study doesn't show asthma is causing AFib.

"The theory is they both have a common origin – systemic inflammation," said Miller, who was not involved with the study. "But we don't know if that is the reason asthma patients get atrial fibrillation or if it's the therapies being used to treat the asthma that are inducing the atrial fibrillation."

Tattersall said the connection between the two conditions suggests doctors should be talking to their asthma patients about the importance of heart-healthy behaviors, such as exercise, maintaining a healthy weight and eating a heart-healthy, low-sodium diet.

"Being aware there is this association means we need to help patients focus on these primary prevention things we know we should be doing but that are often the hardest things to do," Tattersall said. "But they can help with asthma and they can also reduce risk for atrial fibrillation."