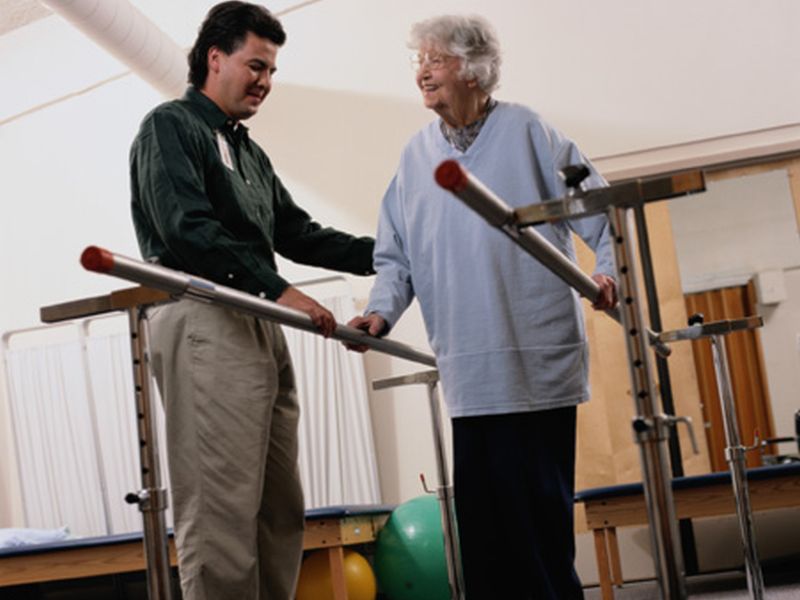 "Rehabilitation after a stroke traditionally focuses on patients practicing low-intensity walking, usually only in a forward direction, which does not provide enough of a challenge to the nervous system to enable patients to negotiate real-world situations, such as uneven surfaces, stairs or changing direction," explained study author T. George Hornby. He's a professor of physical medicine and rehabilitation at Indiana University School of Medicine.

His team wondered if rehab that included more challenging movements might produce even better results.

The study included 90 adult patients who had weakness on one side of the body from a stroke at least six months earlier.

The variable tasks included walking on uneven surfaces, up inclines and stairs, over randomly placed obstacles on a treadmill and across a balance beam.

No serious problems occurred during the training sessions, suggesting that stroke survivors can be pushed harder during rehabilitation, according to the study published Aug. 22 in the journal Stroke.

"We need to move beyond traditional, low-intensity rehabilitation to challenge the nervous and cardiovascular systems so patients can improve function and perform better in the real world," Hornby said in a journal news release.

Rehab that doesn't challenge the nervous system doesn't make a significant difference in a patient's recovery after stroke, he said.

"We found that when stroke patients are pushed harder, they see greater changes in less time, which translates into more efficient rehabilitation services and improved mobility," he said.

This was a small study, so the next phase in this research would be a large, multicenter clinical trial, Hornby said.