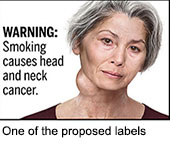 THURSDAY, Aug. 15, 2019 (HealthDay News) -- Smokers would have to get past some gruesome imagery to purchase a pack of cigarettes under a new rule proposed Thursday by the U.S. Food and Drug Administration.

Cigarette packs would have to carry very large warning labels that would feature color photos that graphically illustrate the damage smoking can cause, the FDA said Thursday. It would be the most significant change to cigarette labels in more than 35 years.

Examples provided by the FDA include:

These warning labels would take up half the space on the front and back of a cigarette pack. They would also occupy at least 20% of the area at the top of all cigarette advertising.

Most developed countries worldwide have already adopted similar graphic warning labels, according to the Associated Press.

"Cigarette packages and advertisements can serve as an important channel for communicating health information to broad audiences that include both smokers and nonsmokers," Mitch Zeller, director of the FDA's Center for Tobacco Products, said in an agency statement.

"In fact, daily smokers potentially see warnings on cigarette packages more than 5,100 times per year, and all members of the public, including adolescents, are exposed to cigarette advertisements in print and digital media, as well as in and around stores where cigarettes are sold," he added.

Health warnings first appeared on cigarette packs in 1966, and were most recently updated in 1984 to include the well-known admonition from the U.S. Surgeon General about the health risks of smoking.

But research has shown that these warnings have become virtually invisible to both smokers and nonsmokers, the FDA noted.

A previous effort to toughen warning labels by the FDA was defeated in court in 2012. A panel of judges ruled that the agency couldn't force tobacco companies to slap grisly images of dead bodies, diseased lungs and cancerous mouth sores on cigarette packs.

The FDA began working on the research to inform this latest proposed rule in the middle part of 2013, after the agency decided to not take that first legal fight to the U.S. Supreme Court, Zeller said.

The agency is currently under court order to issue a final rule on warning labels by March 2020, Zeller said during a media briefing Thursday.

"We took the time to get this right, so that we have when this is final the strongest combination of color graphics and text warnings to advance the fundamental governmental interest, which is to improve the public's understanding of the negative health consequences of smoking," Zeller said.

"While most people assume the public knows all they need to understand about the harms of cigarette smoking, there's a surprising number of lesser known risks that both youth and adult smokers and nonsmokers may simply not be aware of," Acting FDA Commissioner Dr. Ned Sharpless said.

Sharpless pointed out bladder cancer as one example -- that health impact that would be highlighted with the image of bloody urine.

"While many people are aware smoking causes lung cancer, research has shown that the public is generally not aware of the very strong link between bladder cancer and smoking," Sharpless said. "In fact, current smokers have nearly four times the risk of bladder cancer compared to people who have never smoked."

The proposed rule will be open for public comments for 60 days through Oct. 15. After it goes into effect, tobacco companies will have 15 months to slap them onto their packaging and advertisements.