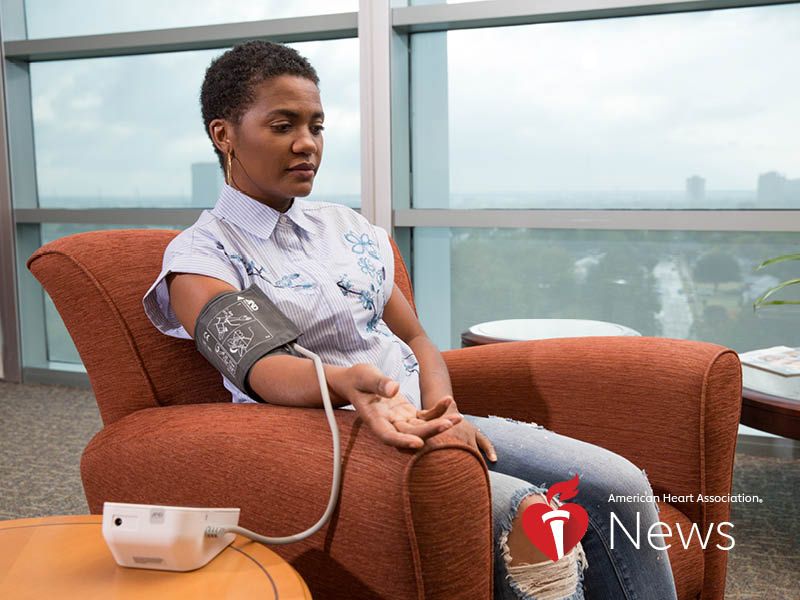 TUESDAY, Aug. 13, 2019 (American Heart Association News) -- As the severity of high blood pressure rises, the risk of stroke rises almost twice as quickly in women compared with men, according to a new study.

Published Tuesday in the Journal of the American Heart Association, the research raises the question of whether sex-specific guidelines may be needed for controlling high blood pressure.

High blood pressure is the most common modifiable risk factor for stroke, which is the third leading cause of death for women and the fifth leading cause for men.

"Our findings basically suggest that the risk of stroke may increase with each level of hypertension, more so in women than men," said Dr. Tracy Madsen, the study's lead author. She is an assistant professor of emergency medicine at Alpert Medical School of Brown University in Providence, Rhode Island.

Madsen's team looked at sex and racial differences in the level of hypertension severity and stroke risk in 26,461 men and women in the United States. More than half of participants were women, 40% were black, and the average age of men was 66, while for women it was 64.

The study included an oversampling of people living in the southeastern states of the so-called "stroke belt," which includes Alabama, Arkansas, Georgia, Indiana, Kentucky, Louisiana, Mississippi, North Carolina, South Carolina and Tennessee. People in the region have a 34% higher risk of stroke than their counterparts elsewhere in the country.

Researchers found that for every 10 mmHg increase in blood pressure, the risk of stroke widened between white women and men, and the risk of stroke across increasing levels of blood pressure was about twice as high in women than men. These sex differences did not hold true, however, among black men and women, even though this group experienced more severe hypertension than whites.

The dramatic contrast in stroke risk between men and women suggests a need for closer examination of how hypertension behaves in each group, Madsen said. Women have too often been underrepresented in clinical trials, despite their higher prevalence for stroke and stroke-related mortality.

"We need to see if this (gap) holds true in a prospective, randomized clinical trial and whether it would be helpful to have tighter blood pressure control for women," she said.

Not everyone agrees these findings point to a potential need for sex-specific guidelines for treating hypertension.

That issue was evaluated when the American Heart Association and the American College of Cardiology developed new guidelines for controlling blood pressure in 2017, said Dr. Paul Whelton, who chaired the guideline writing committee. People are considered to have high blood pressure if their systolic, or top number, is 130 or higher or their diastolic, the bottom number, is 80 or higher.

"For treatment, there hasn't been any convincing demonstration that there's much of a difference between men and women," said Whelton, a professor at Tulane University in New Orleans and the Show Chwan Health System Endowed Chair in Global Public Health.

He said the new study's findings surprised him, but more research is needed before making any conclusions.

"The differences in this study are fairly substantial," he said. "It raises a red flag, but for me, at least, I don't think it has convincingly demonstrated an answer one way or another."

Madsen's team also looked at how the number of hypertensive medications a person was taking impacted their risk for stroke.

They found the more medications it took to maintain good blood pressure control, the higher that person's stroke risk. That risk increased 23% for each additional class of medication. This held equally true for both men and women.

"This does not suggest that the medications themselves increase the risk of stroke," Madsen said. "But someone who takes three medications to maintain a systolic blood pressure level of 140 mmHg has a higher stroke risk than someone who needs only one medication to reach that same level. It's because their blood pressure is more difficult to control or resistant to treatment."

Madsen said the study points to the need to gather more sex-specific data in future investigations.

"There are hidden sex differences in many disease processes that we really don't even know about," she said. "We may not have enough data to say that tomorrow we need to implement sex-specific guidelines for how we treat hypertension, but we also don't have the data to say that our one-size-fits-all approach to stroke prevention is the right one."