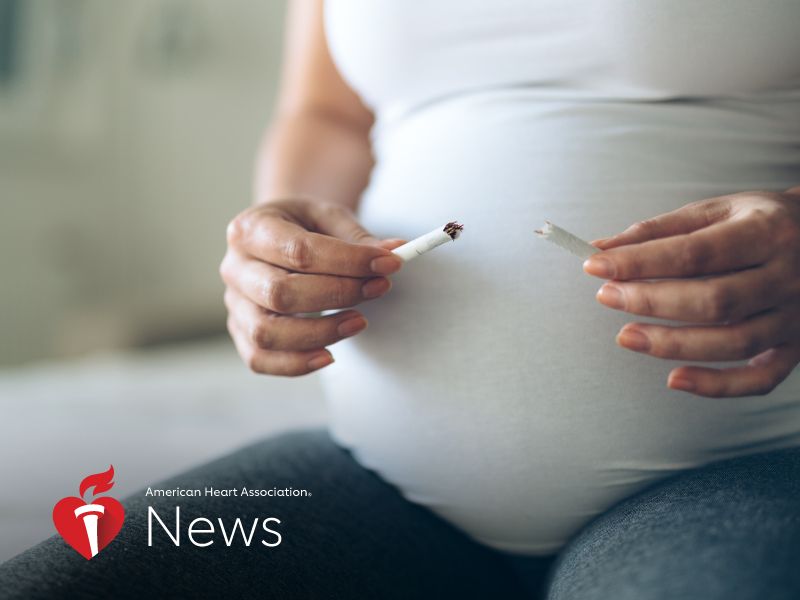 THURSDAY, Aug. 1, 2019 (American Heart Association News) -- Exposure to cigarette smoke in utero strongly harms a newborn heart's ability to repair itself after injury, according to a preliminary study of mice.

Findings in animals may not translate to humans, but researchers of the new study hope it helps scientists advance their understanding of possible regeneration in adult human hearts. They presented their findings this week at the American Heart Association's Basic Cardiovascular Sciences conference in Boston.

Past studies have shown neonatal mice in the first week of life can regenerate their hearts after an injury, including heart attack. While that possibility for human babies is still not fully understood, some anecdotal reports suggest the neonatal human heart also may be able to regenerate after injury.

For the new study, Stanford University researchers exposed one group of pregnant mice to cigarette smoke every day throughout pregnancy. The other group of mice breathed filtered air. Two days after birth, mice pups from each group were given a surgically induced heart attack. Researchers analyzed their cardiac function and tissue to see how the smoke impacted the heart's ability to repair itself.

The study found that exposing mice to daily cigarette smoke in utero "significantly compromised" cardiac regeneration, compared to the mice who breathed nothing but filtered air. The finding could have implications for humans, especially pregnant women who smoke, said Katharina Schimmel, the study's lead author.

According to the Centers for Disease Control and Prevention, 7.2% of women who gave birth in 2016 smoked cigarettes during pregnancy.

"The high number of women smoking while pregnant is shocking, and if this study is translatable to humans, it reinforces the importance of smoking cessation during pregnancy," said Schimmel, a postdoctoral research fellow at Stanford."

"This study suggests that maternal exposure to cigarette smoke may affect the heart in surprising ways. In addition, understanding how this happens could shed light on the mystery of why adult humans can't regenerate damaged heart tissue," said Dr. Richard T. Lee, a professor of stem cell and regenerative biology at Harvard University. Lee was not involved in the study.

Schimmel said researchers are still in the early stages of solving the riddle of why neonatal mammal hearts regenerate, while adult ones don't.

"It's really difficult in the lab to specifically pinpoint pathways that are important for cardiac regeneration," she said. "If you compare a (heart attack) in a newborn mouse with one in an adult mouse, you will find a lot of cellular factors changed that may or may not be related to cardiac regeneration."

She said the study broke new ground by being one of the first of its kind to successfully use highly-sensitive strain imaging echocardiography on newborn mice. She also said the study results are "an important first step" in identifying the cellular processes that take place as newborn mammal hearts regenerate after an injury.

Her group is conducting further research to figure out exactly when and how, the regeneration process stalled in the newborn mice that were exposed to smoke.

"We are hoping to finally be able to pinpoint cellular pathways that are essential for cardiac regeneration," she said. "Our hope is that one day, the adult heart could also recover after suffering a heart attack."