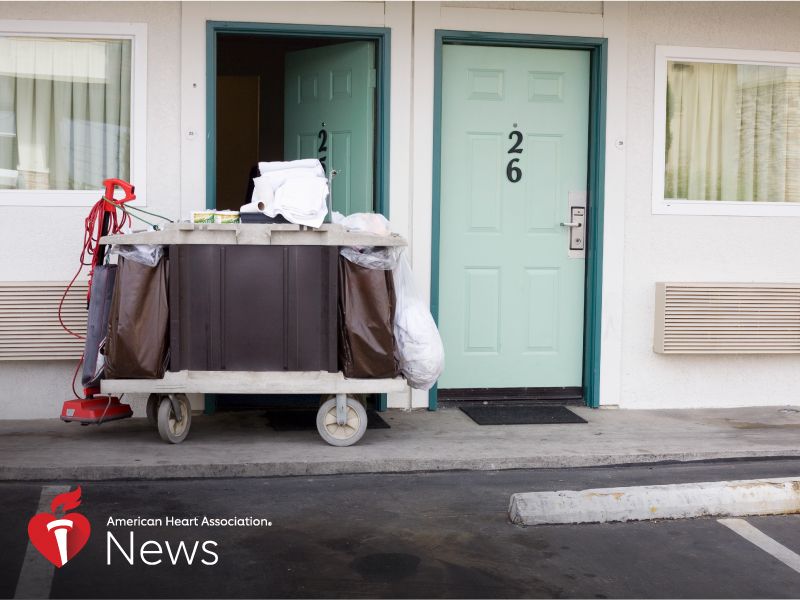 THURSDAY, June 27, 2019 (American Heart Association News) -- People who are homeless or who live in marginal housing where they are vulnerable to homelessness are at higher risk for strokes, even at younger ages, according to a new study.

Researchers worked with 228 people who lived in substandard hotels in a low-income neighborhood in Vancouver, Canada, over a three-year period. Participants were given neuropsychological assessments and interviewed in detail about their substance, medical and psychiatric histories. Each completed a set of lab tests and received an MRI brain scan. The participants' average age was 44.

The scans revealed 11% of people had experienced a stroke, a rate much higher than expected for their age, researchers said in the report. Almost none of them – 23 out of 25 – had reported a history of stroke, suggesting they were not aware of it previously.

Much has been written about the impact social determinants of health have on a person's well-being and life expectancy, but very little exists on the brain health of individuals who are homeless or living in marginal housing, said Dr. Thalia Field, a stroke neurologist and senior author of the study published Thursday in the Journal of the American Heart Association.

The people interviewed in the study lived in single-room occupancy hotels where toilet and shower facilities are shared among a dozen or so people, she said. The buildings were more than 80 years old, in need of repair and have bedbug, cockroach and mouse infestations.

"This is a vulnerable group of individuals with a high burden of (multiple medical conditions) and a greater burden of cerebrovascular disease than expected for their age," she said.

About three-quarters of the people in the study had a history of homelessness. A history of drug and alcohol abuse was common, and a substantial proportion of the group tested positive for HIV and hepatitis B and C.

While risk factors like high blood pressure, diabetes and obesity were lower than the general Canadian population, the 94% smoking rate for the group was extraordinarily high.

Researchers wanted to better understand how mental health issues and substance abuse impact "things like mortality, health services effectiveness, and interactions related to health care and the justice system," said Field, who in July will be an associate professor with the University of British Columbia.

"A more detailed understanding of the burden of disease in this vulnerable group allows for the planning and development of targeted health care and social initiatives."

Dr. Travis Baggett, research director at Boston Health Care for the Homeless Program, said he was impressed by the study's use of imaging to capture the brain health of participants.

Most research of the homeless and marginally housed rely on self-reporting or charted diagnoses, he said.

"To my knowledge, it's one of the first of its kind in describing the neuroimaging findings in a marginally housed population. The neuroimaging component is especially novel," said Baggett, who was not involved in the study. Researchers "could actually examine, in an objective sense, what's going on in the brain."

Traditional risk factors, like smoking, could help explain why marginally housed individuals may be at higher danger for stroke, said Dr. Stephen Hwang, a professor of medicine at the University of Toronto who was not involved in the new research. But social elements like poverty, deprivation and chronic stress also could play a significant role.

"This is a really understudied area. Addressing the cognitive and brain health of disadvantaged populations is probably of enormous importance, and we often neglect it," said Hwang, director of the Centre for Urban Health Solutions at St. Michael's Hospital in Toronto.

"We always think about heart health, but we don't often think about brain health in disadvantaged populations," he said. "In many cases, having neurological deficits and impaired decision-making leads to a cascade of ill health in a whole host of systems, so it's really important that we try to address this."