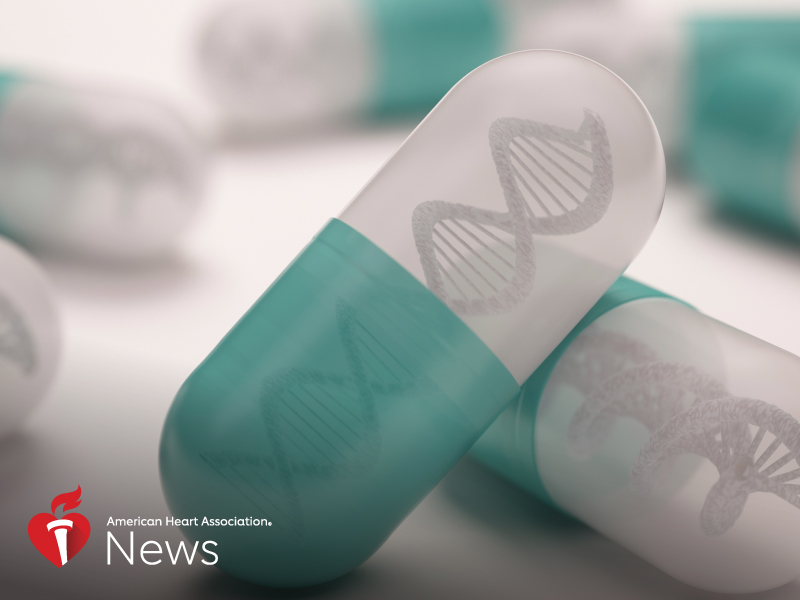 TUESDAY, June 25, 2019 (American Heart Association News) -- Medication can play a huge role in reducing high blood pressure, a leading cause of stroke, heart attack and other serious health problems. Yet given the wide selection of drugs for doctors to choose from, figuring out which drug works best for someone is difficult.

But researchers may have found a better way to predict the effectiveness and side effects of blood pressure drugs, and it doesn't involve taking a single pill. Instead, it relies on genetics.

They then used people's genes to evaluate what a drug would do – both benefits and harms.

Researchers were able to match certain variations in genes with the drug class's effect on lowering heart disease and stroke risk. But they found a possible complication from one particular category of blood pressure drugs examined in the study.

The genetic variants targeted by calcium channel blockers had a "previously unreported possible side effect." Specifically, they were linked to an increase risk of developing diverticulosis, a condition where small pouches develop along the walls of the large intestine. When the pouches get infected or tear, these complications can lead to hospitalization.

"As far as we know, this effect isn't related to blood pressure at all, and this is very much a novel insight generated by the study," said the study's lead author, Dr. Dipender Gill, a clinical research fellow at Imperial College London.

Neither ACE inhibitors nor beta-blockers showed previously unknown side effects.

Researchers corroborated the association between calcium channel blockers and diverticulosis by tapping into another genetic database, this one of DNA samples available through the biobank operated by Vanderbilt University in Tennessee.

An estimated 874 million adults worldwide have high blood pressure, often called "the silent killer" because it rarely shows obvious symptoms while it wreaks havoc on the body. Also called hypertension, high blood pressure is usually treated through lifestyle modifications – specifically changes in diet and physical activity levels – and the use of one or more medications.

But most high blood pressure drugs are tested in older or high-risk populations for a relatively short period of time, and the trials rarely capture side effects beyond the more obvious ones.

"The real strength of the study is that it was able to assess for unexpected effects of medications on human health in an unbiased way," said Dr. Kiran Musunuru, an associate professor of cardiovascular medicine and genetics at the University of Pennsylvania, who was not involved in the research.

"There's no obvious connection that would have led the medical community to suspect a link between calcium channel blockers and diverticulosis, but it appears there might be one after all," he said. "The idea of using genetic variants that mimic the effects of medications to get a better sense of whether the drugs will be effective and safe, before the medications are used in people, will be an important element of drug development going forward."

"These medications are very useful. The doctor's prescribing them for an important reason. What we've highlighted is information that should inform further study and investigation," he said.

Gill said although the study offers "novel insight" into possible side effects of calcium channel blockers, the bigger implication is for future research.

"In the current era, the vastness of genetic data makes it possible to do very advanced and sophisticated analyses very rapidly," he said.

Ioanna Tzoulaki, the study's senior author and an epidemiologist at Imperial College London, added, "This approach is evolving as a powerful cost- and time-efficient tool to help prioritize or design those trials that are more likely to be successful."