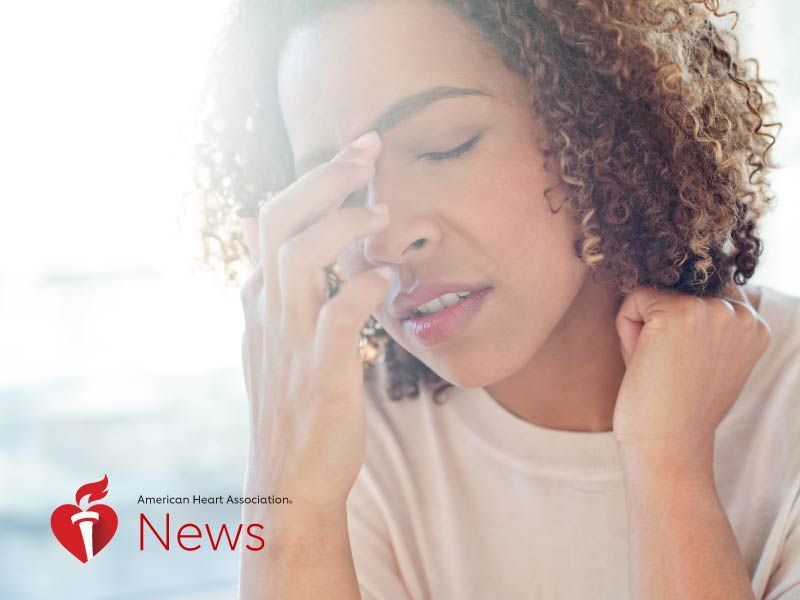 FRIDAY, June 21, 2019 (American Heart Association News) -- Try not to let it give you a headache, but be aware: People who suffer migraines, especially women, seem to have a higher risk of stroke.

"It's not like people with migraines should be waiting anxiously about the possibility of having a stroke, but it does occur," said Dr. Mitchell Elkind, a New York City neurologist and professor at the Columbia University College of Physicians and Surgeons.

"More work needs to be done, but I think it's accepted among physicians that among women, migraine with aura is associated with a doubling of risk."

First, some perspective: According to the federal Office on Women's Health, about 30 million Americans suffer from migraines, the recurring, throbbing headaches that can be debilitating and accompanied by nausea and weakness.

A particularly alarming variation of the disorder is known as migraine with aura. That's when the headache is accompanied by sensory disturbances ranging from seeing flashes of light and zigzag lines to tingling sensations and difficulty speaking.

Three-fourths of migraine sufferers are women. Of the roughly 800,000 strokes suffered each year in the United States, the American Migraine Foundation estimates just 2,000-3,000 of them are linked to migraines.

But the link is there, and it likely runs through the arteries.

Dr. Karen Furie, chair of the department of neurology at Brown University Medical School in Rhode Island, said migraines involve a spasm in the artery. When that's combined with oral contraceptives, which can increase the risk of blood clots, problems can develop.

"It's just like a hose," she said. "If you constrict the vessel, you reduce flow. If you are on hormones that increase the risk of clotting and the vessel goes into spasm, you may be more likely to form a clot, and that can go on to cause a stroke."

Furie, who chairs the American Heart Association Stroke Council, stressed that the phenomenon remains relatively rare. Strokes occur much more frequently in older people, she said, while the occurrence of migraines often declines as people get older.

The best response to the uncertainty starts at the doctor.

"If you suffer from migraine with aura you should make sure your health care providers are aware of that," Furie said. "I'm not sure people always offer up their headache symptoms. And when women do have migraine with aura, you at least try to mitigate what's already a low risk by reducing the other risk factors for stroke."

That means not smoking, staying active, not abusing alcohol, and controlling weight, blood pressure, blood sugar and cholesterol. Some women with other risk factors may want to think carefully about taking oral contraceptives, Furie said – and if they do, they shouldn't smoke.

With older patients, Elkind said, doctors watch for the onset of headaches or changes in existing migraine patterns.

"There are certain things we consider red flags," he said. "If somebody has had infrequent headaches and they're suddenly occurring more often, or if moderate headaches suddenly become severe, that could be an indication of a new problem.

"We obviously have to be concerned that it's not a stroke, so they get evaluated pretty thoroughly."

Elkind said more research needs to focus on the physiological mechanisms of the migraine-stroke link, as well as genetic factors and another less well-known complication of migraine with aura – an increased risk of heart attack.

"That's really interesting," he said. "We need to know what it is about migraines that leads to heart disease."