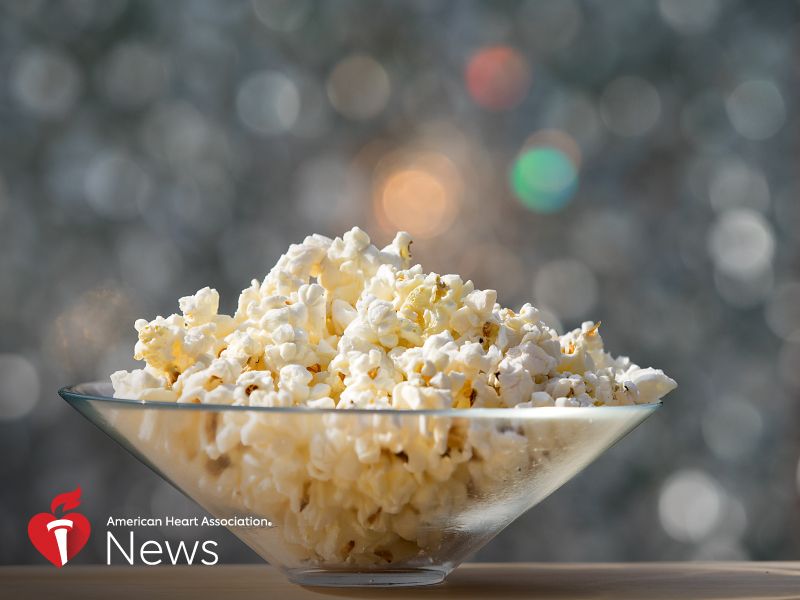 TUESDAY, June 18, 2019 (American Heart Association News) -- Popcorn, with its ample dietary fiber and typically low calorie count, makes it easy to understand why many people think a giant bucket at the movie theater qualifies as a healthy snack.

But be careful before you start scooping handfuls into your mouth as the opening credits roll; not all popcorn is created equal.

When it's air-popped and lightly seasoned, popcorn is an efficiently healthy snack. That's because it is a whole grain, and high-fiber whole grains have been linked to a lower risk of heart disease, diabetes, some cancers and other health problems. Federal dietary guidelines say half of all grains consumed should be whole grains, and popcorn packs more fiber per serving than whole-wheat bread.

"When prepared well, popcorn actually is a pretty good snack," said Maya Vadiveloo, an assistant professor in the department of nutrition and food sciences at the University of Rhode Island. "It's stable. It's inexpensive. It's fairly tasty. For people who might be struggling to eat adequate fruits or vegetables or other whole grains, it's a low-risk snack to start.

"Popcorn at the movies is very different than popcorn made at home."

A tub of movie theater popcorn can contain up to 1,090 calories and 2,650 milligrams of sodium.

"Even a small movie theater popcorn has significant calories and is very high in salt," Vadiveloo said. "Sodium is one of the leading risk factors for hypertension and stroke in general, so it's something we do care about from a perspective of heart disease."

Some theater chains pop their popcorn in canola oil. Vadiveloo said popcorn made with measured amounts of heart-healthy oils such as canola or olive oil can still be healthy. But, she said, it's better to have control over how the snack is prepared from the start.

The same logic goes for popcorn coated in sugar, such as caramel corn, she said.

"Air-popped would be a good way to prepare popcorn because it gives you some control over the seasonings that you add afterward -- how much salt, or how much oil or butter," Vadiveloo said.

Microwave popcorn may have posed an entirely different set of health problems in the past, but many of the chemicals involved have been removed in recent years.

One such chemical, diacetyl, has been linked to a disease called popcorn lung, which causes shortness of breath and wheezing. Diacetyl, which gives some microwave popcorn its buttery taste, is found in cheese, butter, yogurt and wine, and it's not harmful if swallowed; the danger comes when it is inhaled in large amounts.

In addition to fiber, popcorn also is a good source of polyphenols, which are antioxidants that have been linked to better blood circulation and digestive health, as well as a potentially lower risk of certain cancers.

Another health benefit of popcorn is its high satiety. Because of popcorn's high fiber content, its low calorie count and its low energy density, popcorn is considered to be a food that can aid in weight loss. For example, popcorn has been shown to make people feel fuller than a similar calorie amount of potato chips.

"I could give you 200 calories of a milkshake, and that might be 5 or 6 ounces," Vadiveloo said. "Your body isn't going to recognize you've had 200 calories and feel satisfied. But if you eat 200 calories of fruits and vegetables, which are high in fiber and water, you're going to eat quite a large portion size to get to 200 calories. The same goes for popcorn."