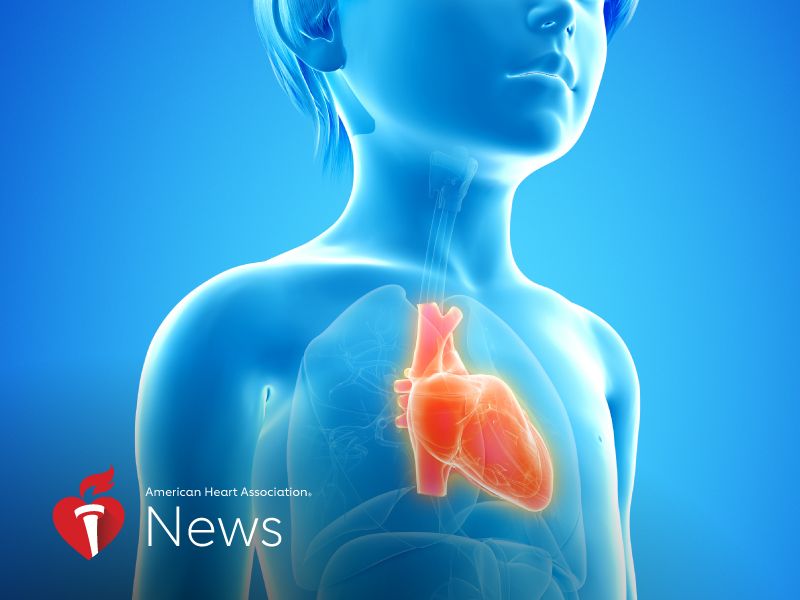 TUESDAY, May 28, 2019 (American Heart Association News) -- After an uneventful pregnancy, Amanda Blanchfield thought she had delivered a healthy baby, a boy she and her husband named Cash.

A slight heart murmur clued doctors that there was a problem. An echocardiogram uncovered cardiomyopathy, a disease of the heart muscle.

In Cash's case, an obstruction made it hard for blood to flow through his heart, causing it to work harder and grow larger. A heart that should have been the size of a strawberry instead nearly took up his entire chest.

"It was the worst case (his) doctors had ever seen, because his heart was so incredibly thick," Blanchfield recalled.

Within two months of his birth, Cash was placed on a transplant list where he waited 51 days for a new heart.

Today, he's a healthy 3-year-old. But so much about the condition that nearly killed him remains a mystery. It's why a new report from the American Heart Association aims to raise awareness about the disease in children and urge more research to find better treatments.

While cardiomyopathy in children is rare, it can "result in some of the worst pediatric cardiology outcomes," according to the scientific statement published Tuesday in the journal Circulation.

Cardiomyopathy occurs when cells in the heart muscle form abnormally or are affected adversely by other conditions, making it difficult for the heart to efficiently pump blood. Nearly 40% of children born with cardiomyopathy that results in heart failure or other symptoms either undergo a heart transplant or die within the first two years after diagnosis. The condition is the primary reason children older than 1 year old get heart transplants.

The statement is intended to help declare "what do we know and where are the gaps," said Dr. Steven Lipshultz, who chaired the statement's writing committee.

"Everybody wants clinical practice guidelines, but this field hasn't done enough clinical trials to be able to say, 'There's really strong evidence that, if you see this, you should use this medicine, or you should treat in that way,'" said Lipshultz, chairman of the pediatrics department at the Jacobs School of Medicine and Biomedical Sciences at New York's University of Buffalo.

Pediatric cardiomyopathy occurs in about 1 in 100,000 children – roughly the same incidence of some childhood cancers, such as lymphoma and neuroblastoma. But there is far less research on the disease and little improvement in treatment: The percentage of children who undergo a heart transplant because of cardiomyopathy has not declined over the past decade.

The cause behind the disease is often unknown, although genetic causes are "likely to be present" in most cases.

Cardiomyopathies can be grouped into four categories. Lisa Yue's husband was diagnosed as a teenager with a type known as hypertrophic cardiomyopathy, but his case was considered mild. Still, it was enough of a concern for Yue to mention the disease to the pediatrician for her son Bryan.

"The thought at the time was cardiomyopathy wouldn't show up in young kids," Yue said.

A month after seeing the pediatrician, Bryan's undiagnosed hypertrophic cardiomyopathy led to a fatal cardiac arrest. He died in 1999 at 11 months old.

A year later, the couple welcomed a second son, Kevin, who was diagnosed with cardiomyopathy.

"I remember the head of pediatric cardiology telling us, 'We just don't know enough about this disease to effectively treat it,'" Yue said.

Kevin died in 2001 while waiting for a heart transplant. He was 9 months old.

The limited information available at the time led Yue and her husband to create the nonprofit Children's Cardiomyopathy Foundation to help advance research and increase education. Yue said she hopes the AHA scientific statement will "help physicians better understand this potentially life-threatening heart condition so that more lives can be saved."

Lipshultz said he hopes additional research will eventually lead to pinpointing causes behind cardiomyopathy so children can be treated in more targeted ways.

"(This condition) can cause incredible pain and suffering for children and their families, and it can be very costly to society," he said. "Over time, research is leading to measurable, better outcomes. But we still have a long way to go if we really want to protect and preserve the next generation."