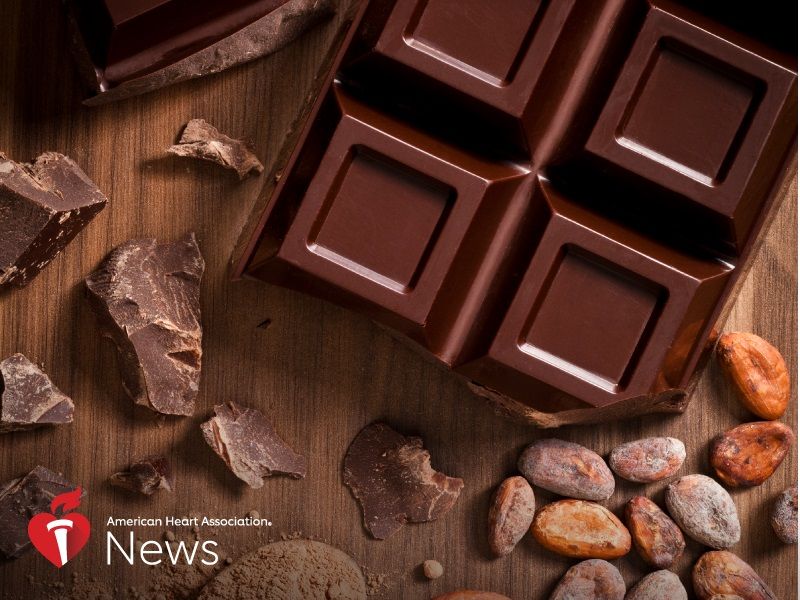 TUESDAY, Feb. 12, 2019 (American Heart Association News) -- Every year, Americans spend $22 billion on chocolate, and it's a safe bet that Valentine's Day accounts for a decent percentage of that total. While a heart-shaped box of chocolates may seem like the opposite of healthy, experts say it's less about the occasional small indulgence and more about making good everyday food choices.

Most chocolate falls into one of three categories: milk chocolate, dark chocolate or white chocolate. Chocolate's darkness is determined by the proportion of cocoa solids made from cocoa beans, mixed with cocoa butter and sugar.

Milk chocolate, the most popular type in America, typically contains about 10 percent cocoa liquor -- the paste made from ground, roasted, shelled and fermented cocoa beans that contains both nonfat cocoa solids and cocoa butter -- compared with a minimum of 35 percent found in dark chocolate. Shoppers can tell how much cocoa liquor is in a dark chocolate bar by looking for the "percent cacao" figure on the label. Cacao is the raw form of chocolate, while cocoa is the heated version of cacao.

White chocolate, however, contains only cocoa butter -- no cocoa solids -- combined with sugar and other ingredients. (And for many people, it's not really considered a chocolate at all.)

A standard bar of dark chocolate with 70 percent to 85 percent cacao contains about 600 calories and 24 grams of sugar, according to the U.S. Department of Agriculture's nutrient database. Milk chocolate contains roughly the same number of calories but twice the sugar.

The amount of cocoa solids in dark chocolate is important because it can be an indicator of the amount of dietary flavonoids, which are antioxidants found in fruits, vegetables and certain drinks. Research suggests consuming more dietary flavonoids is linked to a lower risk of coronary heart disease.

"While dark chocolate has more flavanols than other types of chocolate, the data to suggest there is enough to have a health effect is thin at this point," said Alice H. Lichtenstein, the Gershoff professor of nutrition science and policy at Tufts University in Boston.

A potential explanation, researchers said, is that the flavanol dose was about half that used in earlier studies that found a beneficial effect on blood pressure 274 milligrams of flavanols compared to 586.

But that amount of flavanols "is unlikely achievable with daily consumption of commercially available dark chocolate," Lichtenstein said.

Researchers at Brigham and Women's Hospital in Boston are currently studying whether a 600-mg daily supplement of cocoa flavanols can reduce the risk of heart disease, stroke and cancer.

In the meantime, chocolate can still be part of an overall healthy diet.

"If you enjoy chocolate," Lichtenstein said, "the important thing to do is choose the type you enjoy the most and eat it in moderation because you like it, not because you think it is good for you."