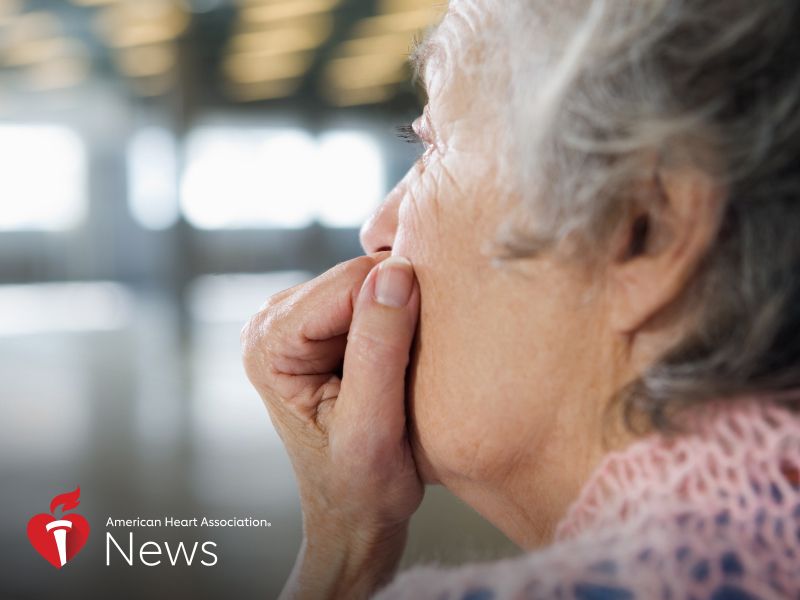 THURSDAY, Feb. 7, 2019 (American Heart Association News) -- Angie Read Doyal was unsure if she'd be the same after her stroke. So, when she felt ready to return to work after only seven weeks of intense physical, speech and occupational therapy, she was confident.

But that self-assurance quickly was undermined by severe anxiety, panic attacks and depression.

New research adds to the evidence that Doyal's experience is all too common.

A new study finds that one in four stroke survivors report experiencing moderate to severe anxiety two to eight weeks after their stroke, with incidence more common in women and those who are single, divorced or widowed.

"We believe there is a bi-directional relationship between stroke and anxiety," said the study's lead researcher Jennifer Beauchamp, a researcher at the University of Texas Health Institute for Stroke and Cerebrovascular Diseases in Houston. The findings were reported this week at the American Stroke Association's International Stroke Conference in Honolulu.

The researchers analyzed the health records of 194 ischemic stroke survivors. An ischemic stroke occurs when a blood vessel to the brain is obstructed, cutting off blood flow. It accounts for about 87 percent of the nearly 800,000 strokes that occur in the United States each year.

All of the survivors had been screened for generalized anxiety disorder at a follow-up visit at a stroke clinic. Beauchamp and her team found that 32 percent of women and 21 percent of men reported moderate to severe anxiety. The patients with this level of anxiety were significantly more likely to be single, divorced or widowed than those without moderate to severe anxiety.

Anxiety after a stroke may be due to a combination of psychosocial factors and biological changes to the brain caused by the stroke, said Dr. Nada El Husseini, a neurologist at Duke University Medical Center in Durham, North Carolina, who was not involved with the study. Having a history of anxiety or depression may also play a role, she said.

That was the case for Doyal, who was diagnosed with anxiety about 15 years before her stroke and had always easily managed it with medication. She also had a family history of depression.

But she'd never felt so overwhelmed until after her stroke.

"I felt like I had 10 pounds of bricks on my chest," she said. "I wasn't sleeping. I wasn't eating. I isolated myself. It was destroying my life."

Doctors tried one medication after another, and nothing helped.

"It was worse than the stroke itself," Doyal said. "I was afraid of my own shadow."

More research is needed to help women like Doyal recover after a stroke, said Beauchamp, adding that the patient's anxiety also can affect the caregivers.

El Husseini said as researchers look to identify the best way to treat stroke patients who experience anxiety, they also should "take into consideration the other conditions that stroke patients are predisposed to, including grief, depression, sleep disorders, post-stroke fatigue and post-traumatic stress disorder, and how they relate to anxiety."

Following her stroke in July 2017, Doyal, who was 46 at the time, had another the following April.

"I have had to fight like hell to get to a point where I feel comfortable most of the time," said Doyal, who sought treatment at an inpatient hospital program for anxiety and depression. "My anxiety is still there, but I am managing it. And luckily the depression is dormant. But I walk on egg shells. I know it can come back at any time."