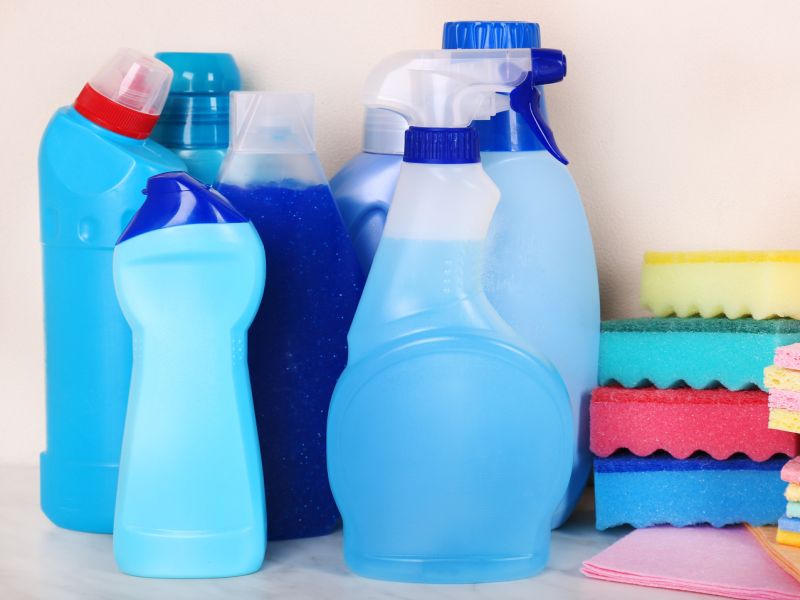 MONDAY, Sept. 17, 2018 (HealthDay News) -- If you're a clean freak, you could be inadvertently fattening your children, a new study suggests.

The research can't prove cause-and-effect, but suggests that household disinfectants might be promoting childhood obesity by altering the gut bacteria of infants.

Fecal samples showed that 3- and 4-month-old infants regularly exposed to antibacterial household cleaners had higher levels of a type of gut bacteria that squeezes extra energy out of food, researchers found.

These babies were more likely to have a higher body mass index (BMI) and to be either overweight or obese by age 3, the study authors said.

On the other hand, babies whose parents used "eco-friendly" cleaning products had lower odds of excess weight by age 3, the findings showed.

"Take it easy when you're cleaning with disinfectants," said senior researcher Anita Kozyrskyj, a professor of pediatrics at the University of Alberta in Canada. "Our observations were at the high end [of cleanliness], with people who were cleaning more than weekly, up to daily."

Representatives of the U.S. cleaning products market said they were "disappointed at the sensational claims" made by the researchers.

The study ignored other possible explanations for kids' excess weight, such as when solid foods were introduced and the sorts of foods provided to each child, said Richard Sedlak, executive vice president of technical and international affairs for the American Cleaning Institute.

"Based on our scientific and technical review, the assumptions made by the researchers don't really hold up," Sedlak said.

In the study, the research team collected fecal samples from 757 infants, aged 3 months to 4 months, and asked the babies' mothers about their use of household cleaners. They then tracked weight gain in the babies to age 3 years.

Antibiotics and antimicrobial agents can alter any person's gut makeup (microbiome) by killing off certain species of bacteria, which allows room for others to blossom.

The most notorious example is Clostridium difficile, a bacteria that can flourish from overuse of antibiotics and lead to life-threatening diarrhea.

According to Kozyrskyj, "Disinfectant products used very often, weekly or greater, did cause changes to the infants' gut bacteria. It caused some bacteria to decline and others to increase."

Specifically, antibacterial cleaners were linked to an increase in gut levels of Lachnospiraceae in infants.

Lachnospiraceae bacteria should not be heavily present in the guts of babies who are not yet on solid food, explained Gail Cresci, an expert in pediatric gastroenterology with the Cleveland Clinic.

These bacteria typically are "good" bacteria that feed on tough-to-digest carbohydrate fibers, contributing extra energy to the body, Cresci said.

"You don't start to see them until the diet has been advanced to solids, around the age of 2 or 3," she added.

Having an abundance of Lachnospiraceae bacteria from an early age could cause growing kids to be bombarded with additional calories, Cresci said.

"It could make sense that if there is an increase of these bacteria early, at 3 months, it could then allow the microbiome to harvest more energy and at that age, it would be stored as fat," Cresci explained. "That could potentially contribute to obesity later."

Infants living in homes with the highest use of disinfectants were twice as likely to have a gut microbiome enriched with Lachnospiraceae, the researchers reported.

Higher Lachnospiraceae levels were associated with higher BMI scores at ages 1 and 3, according to the report.

Kozyrskyj said that the researchers "found that those Lachnospiraceae elevated with disinfectant use were likely responsible for this overweight development. They were in the pathway."

Infants were more likely to have normal weight when eco-friendly cleaners were used daily. These cleaners are either homemade or store-bought cleaners that use natural ingredients such as vinegar, peroxide, baking soda, citric acid or essential oils, Kozyrskyj noted.

Although the findings are interesting, you can't draw a clear cause-and-effect relationship from this study, said Dr. Sheela Magge, director of pediatric endocrinology at Johns Hopkins in Baltimore.

"I would agree there's biologic plausibility, but we obviously need more work to establish what's the cause and what's the effect," Magge said. "It's always difficult to really establish that one particular thing, in this case these household cleaners, causes increased weight gain."

The study, which was funded in part by the Canadian Institutes of Health Research, was published Sept. 17 in the CMAJ (Canadian Medical Association Journal).