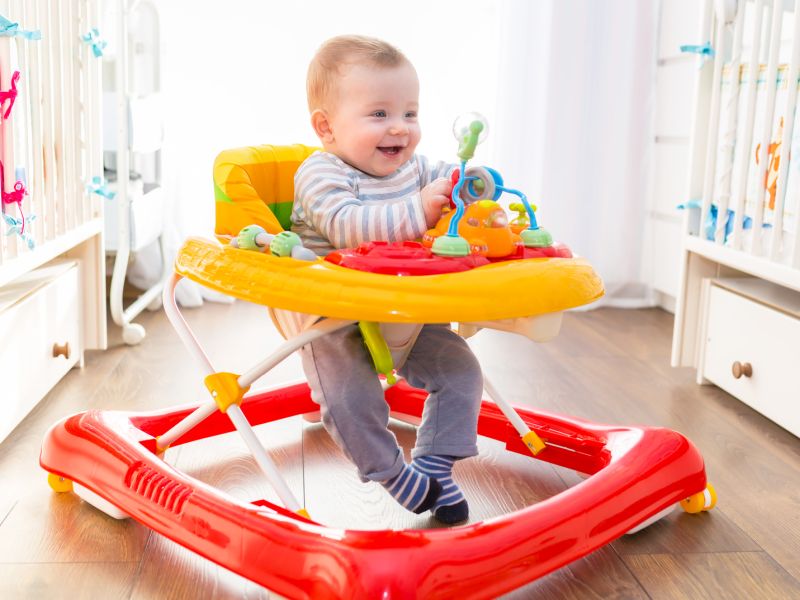 MONDAY, Sept. 17, 2018 (HealthDay News) -- Despite decades of warnings about the hazards of baby walkers, thousands of toddlers still end up in hospital emergency rooms with walker-related injuries, new research shows.

The study reported that more than 230,000 children younger than 15 months old were treated in emergency rooms between 1990 and 2014. More than 10,000 of those youngsters ended up being admitted to the hospital.

"Baby walkers remain a serious and preventable source of injury to young children and should not be used," said senior study author Dr. Gary Smith, director of the Center for Injury Research and Policy at Nationwide Children's Hospital in Columbus, Ohio.

"Baby walkers give quick mobility -- up to 4 feet per second -- to young children before they are developmentally ready," he said, stressing, "there are still too many serious injuries occurring related to this product."

Infant walkers are made for use in young children who can't yet walk. Most injuries occur when a baby in a walker falls down stairs. Walkers also allow children access to things they might not otherwise be able to reach, such as an oven door or toxic household substances, the researchers said.

Injuries related to walkers include head injuries, such as skull fractures and concussions, burns, poisoning and drowning, the study team noted.

Stationary activity centers were introduced in 1994. These devices hold baby in a similar upright position, but don't have wheels. Instead, they have different activities within the baby's reach.

In 1997, a voluntary safety standard required the base of baby walkers to be wider than a standard 36-inch doorway, or to have a device that automatically engages a brake if one of the wheels drops over the edge of a step, the researchers said. Canada banned baby walkers in 2004.

In 2010, the U.S. Consumer Product Safety Commission (CPSC) issued additional safety standards. These standards made it easier for the CPSC to stop noncomplying imported walkers from entering the marketplace. The American Academy of Pediatrics has called for a ban in the United States but, so far, the devices are still legal.

The latest study had both good news and bad news. The researchers found that between 1990 and 2003 baby walker injuries went down by 84.5 percent. The number of injuries from falling down stairs dropped by 91 percent.

But of the children injured, 91 percent had a head or neck injury. Nearly three-quarters were hurt after falling down the stairs.

"Warning labels and educational campaigns have not been shown to be effective strategies for reducing baby walker-related injuries. Many families still use baby walkers, despite being aware of their potential dangers," he said.

"Many parents believe baby walkers offer their children entertainment, promote walking, and provide a baby activity while parents are doing something else," Smith said. He added that these products do not promote walking. In fact, they may delay mental and motor development, he said.

But Smith isn't blaming parents for their baby's injuries. "These are good parents who were carefully supervising their children and using the baby walker as intended. Their only error was that they believed the myth that baby walkers are safe to use."

"No matter what gates you have or how securely you shut a door, kids still find a way to get around them," said Richel, who wasn't involved with the study.

"I don't advocate using movable walkers, but if parents can find a safe place for one -- a sunken living room or a finished basement -- then I don't have a problem with them," he explained. But Richel said stationary activity centers are preferable and can be good for a child's development.

The study was published online Sept. 17 in the journal Pediatrics.