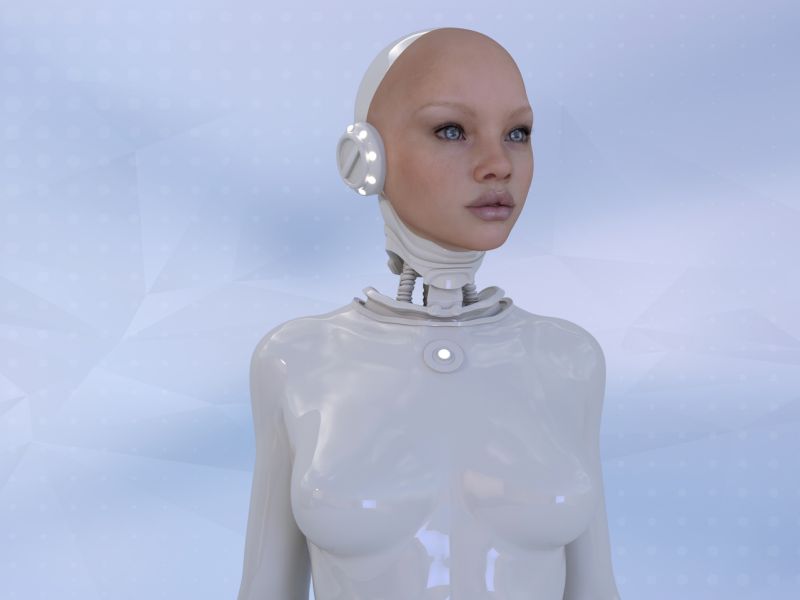 Completely artificial and programmed by computer chips, the somewhat lifelike sex robot is marketed by sex doll maker Realbotix for $15,000. According to The Guardian, she's equipped for intimate relations but is also "the perfect companion," Realbotix says -- able to quote Shakespeare and remember your birthday.

Harmony is at the leading edge of sex robot technology spawned by the $30 billion sex tech industry. "Sexbots" are designed for those who yearn for an opportunity to simulate a sex act in the company of an exceedingly realistic-looking mannequin.

To that end, sexbots often come packed with many lifelike features, which distinguish them from their much more primitive "sex doll" forebears.

Are sex robots simply high-end sex toys? Or might they serve a grander therapeutic purpose, helping to channel or curb bad behaviors -- rape or pedophilia, for example -- that might otherwise be inflicted upon real people?

A pair of British researchers decided to try and answer those questions but faced a big roadblock: A lack of evidence.

"We found a number of health claims were being made, which we analyzed," explained study co-author Chantal Cox-George. She's an academic foundation doctor at St. George's University Hospitals with the NHS Foundation Trust in London. "That sexbots might help safe sex, be therapeutic for people with sex or companionship problems, and might reduce sexual abuse of children."

But in the end, "we were unable to find any empirical evidence in the medical literature to support or refute any of these," she said.

Along with her co-author Susan Bewley, of the Women's Health Academic Centre at King's College London, Cox-George figured there must be some scientific literature exploring the clinical pros and cons of sexbots.

After all, as of 2018, four companies are already marketing adult "sexbots," with one company even offering consumers a child-like iteration, known as a "pedobot."

Four main claims to "health" have been put forward to support sexbot use.

One centered around the notion that the devices might promote safer sex by helping to cut back on sex trafficking, sex tourism or the solicitation of prostitutes.

Another claim is that sexbots might help users gain sexual knowledge and expertise -- without the crippling pressure of real-life intimacy. Or they might bring relief to those suffering from a range of sexually-related struggles, including erectile dysfunction, libido irregularity, loneliness or disability.

A third claim is that sexbots might somehow be used as a therapeutic intervention for pedophiles and other sex offenders.

And a fourth entertained the notion that sexbots might help dissuade users from acting on the urge to rape or engage in any form of non-consensual sex.

But a systemic key-worded search across appropriate research databases -- based on terms such as "robot," "sex," "sex toys," "doll," child sex abuse," sex therapy" and/or "pedophile" -- turned up no proof for these claims, the British duo reported June 4 in BMJ Sexual & Reproductive Health.

And what about arguments against the use of sexbots?

Kathleen Richardson is an ethics professor at De Montfort University in Leicester, England. She told the Washington Post that sex robots represent an intrusion of machines in human relationships. She also believes the devices' perfection and compliance might numb men to relationships with real women. "It offends me that they think a human woman is like a machine," Richardson said.

So Bewley and Cox-George tried to investigate the evidence for these "anti-sexbot" theories -- that they would cause men to expect real women to be constantly available for sex; that the airbrushed and largely hairless features of sexbots might promote unrealistic expectations of beauty; or that sexbots might actually increase the urge to inflict sexual violence on real people.

But there was simply too little evidence available to support or deny these claims, the researchers found.

Their take-home message: "Based on the lack of evidence, which is at the heart of medical professionalism, we advise that sexbots shouldn't be used in medical practice, at least not unless that forms part of robust and ethical research."

Noel Sharkey is professor emeritus of artificial intelligence and robotics at the University of Sheffield in England, and co-founder of the Foundation for Responsible Robotics. He told the Post that Bewley and Cox-George's research was extremely rigorous and "went a lot further than we did and actually delved into hundreds and hundreds of journals."

In the meantime, sexbot manufacturers continue to extoll the benefits of their products.

Douglas Hines, chief executive of sex robot maker TrueCompanion, spoke in an interview with the Foundation for Responsible Robotics last year. He said that "Roxxxy, our sex robot, provides what every adult needs -- unconditional love and support. The ability to feel the loving embrace of a lover is a right every adult should be granted. We provide a solution to help adults meet their social as well as sexual needs."