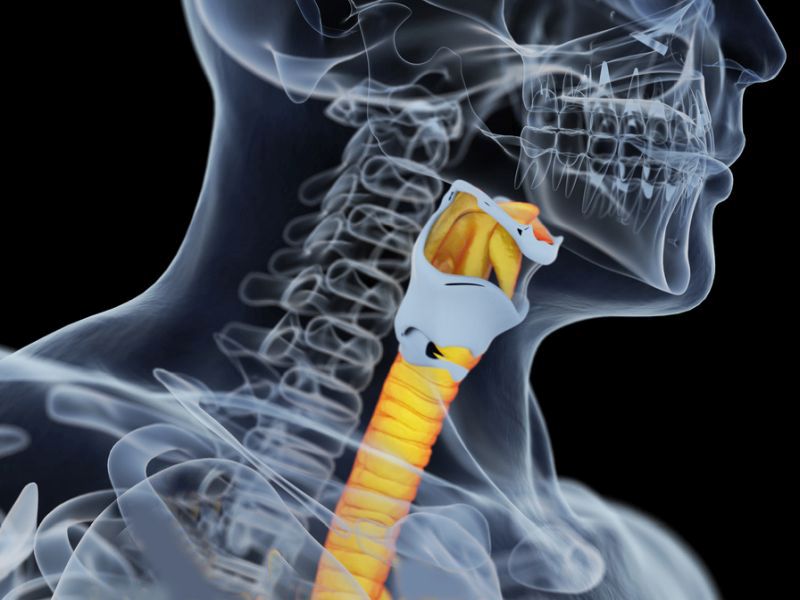 WEDNESDAY, April 4, 2018 (HealthDay News) -- A girl who would have died without a new windpipe is still doing well four years after doctors made her a new one from her own body tissue.

That's according to a new report detailing the results of the 12-year-old's surgery in France.

The girl had been born with a rare condition that causes severe narrowing in the trachea -- the tube in the throat that moves air to and from the lungs.

After years of standard procedures failed, doctors reached for a solution: fashioning a replacement trachea from a prosthetic silicone tube, plus muscle, skin and cartilage taken from the girl's back and ribs.

Nearly four years after the operation, doctors said, the structure is still working. And the patient is "engaged in the usual activities of a 15-year-old girl," they reported in the April 5 New England Journal of Medicine.

The same procedure has been performed in 30 adults -- 23 of whom are still alive, said Dr. Frederic Kolb, one of the surgeons on the team.

Their first patient is still alive after almost 12 years, said Kolb, head of plastic and reconstructive surgery at the Gustave Roussy Institute in Villejuif, France.

Still, a U.S. surgeon who was not involved in the girl's case said the procedure serves as a "stopgap," and does not represent a broad, long-term solution for people with severe tracheal damage.

And that illustrates just how difficult it is to replace something as seemingly "simple" as a trachea, said Dr. Eric Genden.

Genden heads the tracheal airway and transplant program at Mount Sinai Hospital in New York City, where researchers are studying the feasibility of transplanting donor tracheas.

For now, Genden said, there are no long-term answers for patients with damage to the trachea that is so severe that the structure needs to be replaced.

"It seems like it should be easy," he said. "It's 'just a tube.' But it turns out it's very difficult to recreate a trachea."

There are three broad essentials for any replacement trachea to be a lasting solution, Genden explained.

The structure has to be rigid enough; it must have a lining that effectively transports mucus from the lungs, or the patient could suffocate; and it must have adequate blood flow -- which is technically challenging because the trachea is supplied by many tiny blood vessels.

So far, Genden noted, donor tracheas have not been successful because of the blood supply issue.

It is rare for people to need a total trachea replacement. It happens, Genden said, when the structure is severely compromised -- by a birth defect, burn injury or tumor, for example.

When the damage is relatively less severe, surgeons may be able to dilate the trachea using an angioplasty-like balloon. Or sometimes they can implant stents to help keep the airway open, or surgically reconstruct the trachea.

The girl in this case had gone through all the standard options, starting at the age of 6 months, but none brought lasting results, Kolb and his colleagues said.

Kolb acknowledged the limitations of the replacement trachea his team used.

"We are aware that our technique is not ideal," he said. "We have launched a program to improve it and eliminate its downfalls."

There's potential, he added, for "bioengineering" to play a role. That refers to using patients' own primitive cells to grow new healthy tissue.

Bioengineering has a controversial history in tracheal replacement. In 2011, a team led by surgeon Paolo Macchiarini reported what appeared to be the first success in implanting a patient with a trachea made from his own stem cells.

However, it turned out that the tactic did not work, and most of the handful of patients who received a bioengineered trachea died soon after. Macchiarini was accused of misconduct and eventually fired from Sweden's Karolinska Institute.

When the "success" was initially reported, Genden noted, everyone hoped the answer to tracheal replacement had been found.

"Bioengineering a trachea sounds like such a good idea," he said. "But it hasn't worked out."

According to Kolb, his team's research is focused on a "mixed-construct" replacement that includes only some "simple" bioengineered components.