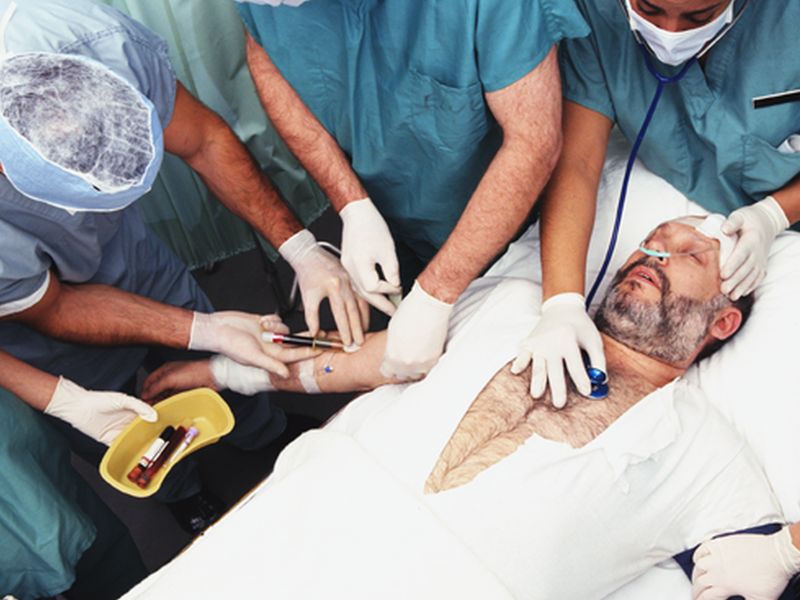 THURSDAY, Jan. 25, 2018 (HealthDay News) -- A procedure that plucks stroke-causing clots from blood vessels in the brain may be useful in many more patients than previously thought, new research shows.

In the emergency procedure, called thrombectomy, doctors snake a catheter device through blood vessels to grab and remove the blockage.

Now, a major new study finds that the procedure remains effective in patients with ischemic stroke -- which occurs when a blood clot blocks the brain's blood flow -- for up to 16 hours after a stroke, rather than the current recommended limit of six hours.

That could mean reductions in death and disability for a much wider group of patients, the researchers said.

"Nearly half of all patients treated between six and 16 hours after the onset of their symptoms were largely spared from the consequences of their stroke," said lead investigator Dr. Gregory Albers. He directs Stanford University's Stroke Center.

"It used to be that by five or six hours after a stroke, we had to say 'I'm so sorry, you arrived too late to be treated,' " he said in a university news release. "But this is a new world."

Dr. Walter Koroshetz, director of the U.S. National Institute of Neurological Disorders and Stroke, agreed that the news could be a game-changer for stroke treatment.

"These astounding results will have an immediate impact in the clinic and will help us save many lives," he said in the news release. "I really cannot overstate the size of this effect."

In light of the findings, the American Heart Association and American Stroke Association issued revised treatment guidelines on Wednesday for ischemic stroke, which accounts for 85 percent of the 750,000 strokes that occur each year in the United States.

The new guidelines expand the window for thrombectomy from six to 24 hours, based on the results of brain imaging in select patients.

The new thrombectomy study was funded by the U.S. National Institutes of Health and was conducted at 38 stroke treatment centers.

In the study, researchers first used imaging software to quickly assess brain blood flow in patients from six to 16 hours after an ischemic stroke. They did so to spot those patients who still had a sufficient amount of healthy brain tissue and therefore might benefit from thrombectomy.

In the procedure, a cage-like stent is guided through blood vessels to the site of the blood clot in the brain. The stent surrounds the clot and extracts it.

Among the patients selected for the study, those who underwent thrombectomy had much better outcomes than those who did not.

People in the thrombectomy group did have a slightly increased risk of brain bleeding in the area where the clot was removed, but the rise in risk was considered statistically insignificant, the research team said. And that bump up in bleeding risk was greatly outweighed by the combined 22 percent lower risk of death and disability, the study authors noted.

But Albers stressed that thrombectomy is not useful for all stroke patients -- only those with enough viable brain tissue left to benefit.

"Only about half of the patients we screened with the brain-imaging software had enough salvageable brain tissue to enter the study," Albers explained. "For the others, the procedure was considered unlikely to be effective."

"The initial time window of three hours was put into place in 1995. It then extended to 4.5 hours, then six, and finally 16 to 24 hours," Moussavi said. "The time window has expanded over the years of research, trials and errors."

Another stroke expert who looked over the findings agreed. Dr. Anand Patel is a vascular neurologist at Northwell Health's Neuroscience Institute in Manhasset, N.Y.

Every second counts in stroke care, but the Stanford team noted that up to 40 percent of strokes occur during sleep, and many patients do not even realize they have had an attack in the night until they wake up from sleep.

But under the new thrombectomy guidelines, "many patients who wake up with stroke will now be able to be treated," Patel said.

The findings were published online Jan. 24 in the New England Journal of Medicine and presented the same day at the American Heart Association's International Stroke Conference in Los Angeles.