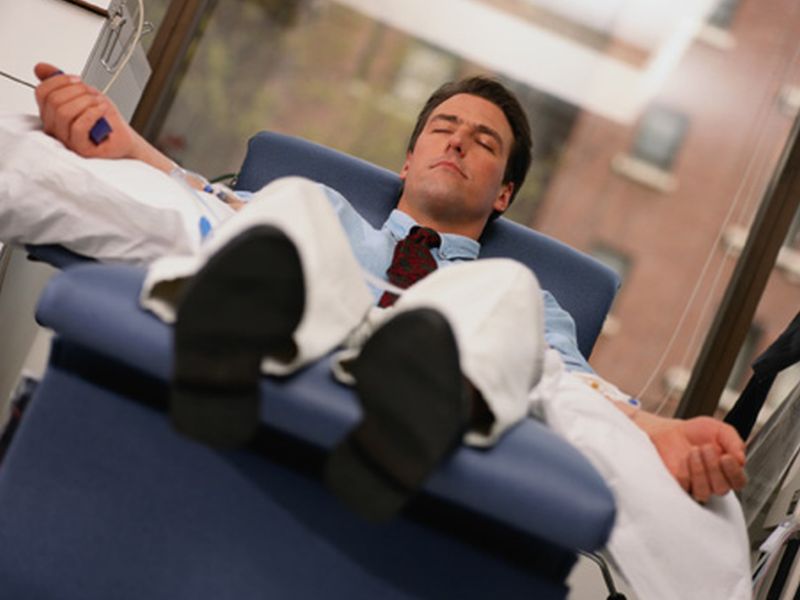 Blood bank supplies tend to be low in January because the holidays and the season's typically inclement weather often keep people from going to a donation site. But, donating blood or blood products, like platelets, is a relatively quick and easy way to make a real difference in the lives of people with serious health problems.

"A lot of donors say it makes them feel very fulfilled," Dr. Melissa George, medical director of the center's blood bank, said in a hospital news release. "Sometimes there are people who need specific platelets that only some donors have, so those donors feel a sense of pride at being called upon to help."

Because blood shortages often occur at the beginning of a new year, the American Red Cross has dubbed January "National Blood Donor Month."

Still, some people won't donate because they have a fear of needles. Others wrongly assume that donations are being made by other people and their blood isn't needed, explained Gwen Howell, the blood bank's chief technologist.

This doesn't bode well for people treated in emergency rooms for injuries and accidents who desperately need blood. People with cancer, transplant recipients, premature babies and others also may need transfusions.

To protect the health of those who get blood transfusions, donated blood is screened for HIV, hepatitis C and other agents of infection and disease, such as Zika virus. Donors also complete surveys and answer questions that could help doctors identify potential risks.

Most healthy adults are able to donate blood, as are teens aged 16 and 17 (with parental permission) in some states. Exceptions include people diagnosed with cancer or those who've had cancer surgery in the past five years. People with serious heart conditions and anyone who's gotten a tattoo in the past year also aren't allowed to donate blood.

Potential donors also have their blood pressure, weight and hemoglobin levels checked to make sure it's safe for them to give blood.

It usually takes about 30 minutes to donate a unit of blood. It may take up to two hours to donate platelets. That's because a machine separates them out of the blood, returning red cells and plasma back to the donor.

While donating their blood, people can read or watch TV. Donors are also offered free drinks and snacks, and checked for lightheadedness before they leave.

After a blood donation, your body naturally rebuilds your supply of blood.

Donors can give blood about every eight weeks, according to George. Platelets can be donated every two weeks.