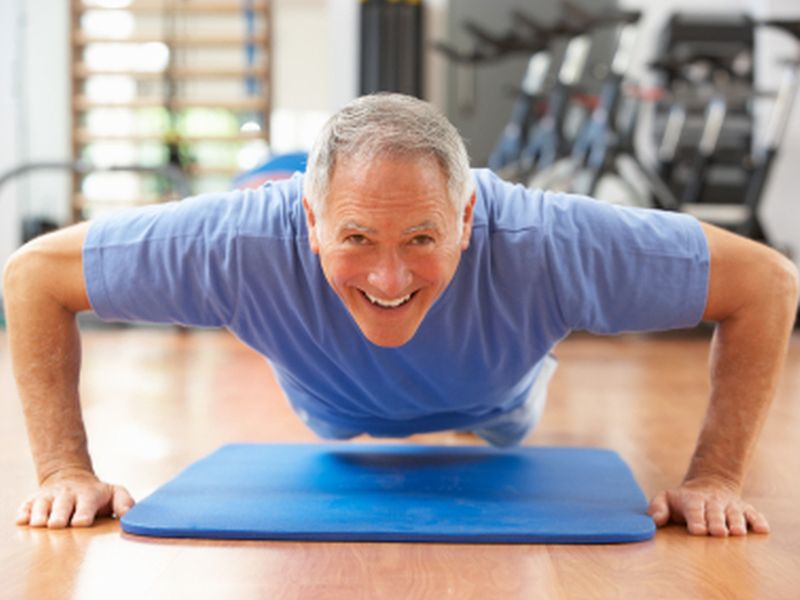 THURSDAY, Nov. 2, 2017 (HealthDay News) -- Seniors who want to lose weight should hit the weight room while they cut calories, a new study suggests.

Older folks who performed resistance training while dieting were able to lose fat but still preserve most of their lean muscle mass, compared with those who walked for exercise, researchers report.

"The thought is if you lose too much lean mass, that this will exacerbate risk of disability in older adults," said lead researcher Kristen Beavers, an assistant professor of health and exercise science at Wake Forest University in Winston-Salem, N.C. "Our findings show if your treatment goal is to maximize fat loss and minimize lean mass loss, then the resistance training is probably the way to go."

Excess pounds significantly contribute to frailty and disability in old age, but there's concern that dieting alone might rob older adults of the muscle they need to maintain their mobility and independence, researchers explained in background notes.

To suss out the best way for seniors to lose weight, Beavers and her colleagues randomly assigned 249 people, average age 67, to one of three different weight-loss groups.

All of the groups went on a diet, but the second and third groups also were asked to exercise four days a week. The second group lifted weights, while the third walked briskly.

After 18 months, the resistance training and aerobic groups both had lost more fat than those who only dieted -- 17 and 15 pounds, versus 10 pounds, respectively.

But the resistance training group maintained more of their muscle mass, losing only 1.7 pounds of lean mass compared with 3.5 pounds of muscle lost in the walking group and 2.2 pounds in the diet-only group.

The findings were published in the November issue of the journal Obesity.

Minimizing the loss of muscle is important not only for protecting seniors' mobility and independence, but also as insurance if they eventually put some pounds back on, Beavers said.

Registered dietitian Stephanie Schiff agreed that resistance training "will help you maintain, or even increase, your lean body mass."

"When you lose weight due to dieting, you lose not only fat mass, you may lose lean muscle mass as well. This can result in a loss of strength, and a possible decrease in metabolism," said Schiff, who works at Northwell Health's Huntington Hospital in Huntington, N.Y. "The key is to maintain muscle mass by eating a healthy diet and getting enough protein, and using resistance training to avoid muscle depletion."

Beavers noted that combining both resistance training and aerobics with dieting potentially would be the best combination.

"The difficulty there is that there are only 24 hours in a day," Beavers said. "It's hard enough to make one behavior change sometimes."

Seniors who've lost weight and want to keep the pounds off should commit themselves to regular exercise, Beavers added.

"It seems like people who are better able to maintain their weight loss have incorporated physical activity as part of their lifestyle," Beavers said.

They also will need to keep eating right, Schiff added.

"The best kind of diet for weight loss usually involves cutting calories," Schiff said. "It keeps you full by including lots of vegetables and fruits, which are great sources of fiber. It includes healthy fats, and does not include a lot of refined sugar or refined grains. It includes enough protein to spare your muscles."