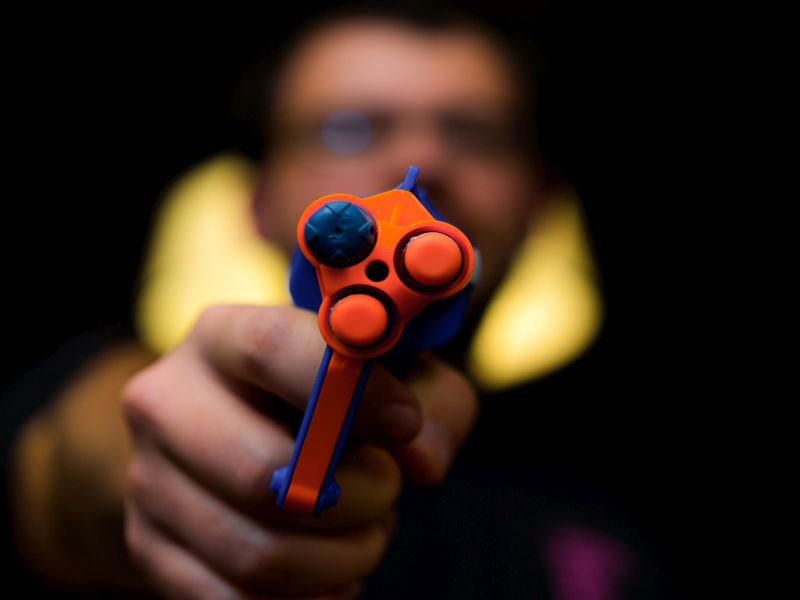 Nerf guns or "blasters" are hugely popular toys -- used by kids and adults alike -- that shoot a soft foam "dart" or "bullet."

But a new report from emergency department doctors at one British hospital is raising concerns that the toy guns might not be as harmless as once thought.

The report outlines three serious eye injuries from Nerf guns and "calls into consideration the need for protective eyewear with their use," according to Drs. Mukhtar Bizrah and Seema Verma of Moorfields Eye Hospital, NHS Foundation Trust, in London.

One U.S.-based doctor agreed it might be time to re-examine the safety of these products. That's because people can now purchase harder -- and potentially more dangerous -- Nerf "bullets" online from manufacturers not tied to the toy's maker.

"The seemingly safe Nerf bullets or projectiles, especially if made by an off-label manufacturer, should now be put in the category of 'potentially causing eye damage,'" said Dr. Vincent Jerome Giovinazzo. He directs ophthalmology at Staten Island Hospital in New York City.

According to the British team, the three patients -- two adults and one child -- were taken to the hospital with eye pain and blurred vision after being hit in the eye by a Nerf gun projectile shot by a child.

Upon examination, all three patients suffered inflammation of the eye (uveitis) and hyphema -- a pooling of blood in the back portion of the eye.

All three patients received eye drops. When they returned for a follow-up visit, the bleeding in their eye had stopped and their sight had returned completely, the doctors reported Sept. 18 in the journal BMJ.

The ER team said one big factor contributing to the problem is the use of cheaper -- but less soft -- projectiles bought online and used with the toy guns.

One of the patients gave the doctors samples of the off-label "bullets" used. The London physicians reported that it was clear that the "unlabeled brand by which the patient was injured was more firm" than typical Nerf gun bullets.

Still, given the speed at which projectiles leave the Nerf guns, the same eye injury might have been possible even with the softer "official" bullets, Bizrah and Verma said.

In a letter to the British doctors, one of the treated patients said many people turn to buying the harder Nerf bullets online because they are much cheaper, and Nerf gun players can easily go through dozens of the bullets in a single session.

Also, the unnamed adult patient said, "my child has pestered me with YouTube videos that show kids how to modify their Nerf guns to make them shoot harder, faster, further."

Dr. Robert Glatter is an emergency physician at Lenox Hill Hospital in New York City. He stressed that the injuries seen in the British study aren't always transient.

"Ongoing visual check-ups are required after such injuries, with the potential for development of glaucoma -- elevated eye pressure -- requiring eye drops," Glatter explained.

And he noted that "the most recent versions of Nerf darts available on the market have a redesigned tip, which makes them more precise, and therefore at greater risk for inflicting eye injuries."

Along with Giovinazzo, Glatter agrees that protective eyewear may be warranted when anyone battles others with a Nerf gun. Furthermore, Glatter said, "stronger warning labels are necessary to alert parents to the potential for serious eye injuries and risk for permanent vision loss if teens and children play with these 'toys.'"