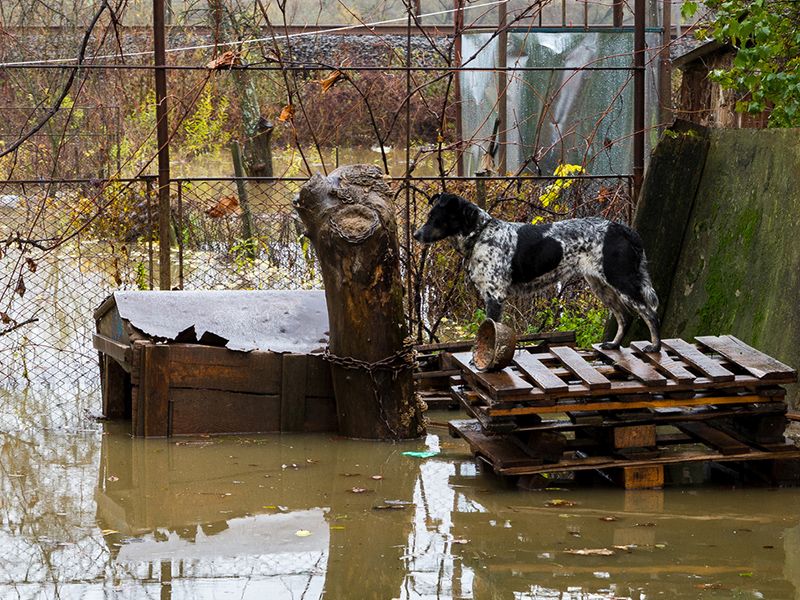 FRIDAY, Sept. 15, 2017 (HealthDay News) -- Judi Hudek and David Clevinger braved Hurricane Irma at a friend's home in Florida rather than a shelter for one reason -- their three cats.

They had planned to huddle in a nearby hurricane shelter, but when they arrived they found that the cats would be forced to stay in a small room with a group of loud, barking dogs.

"It was maybe the most difficult decision I've made in my entire life," said Clevenger, 47, who lives with Hudek, 48, in Bradenton, Fla. "I had the choice of either putting our three cats through that, or sheltering with our friends and hoping we could withstand the storm."

Their dilemma is all-too-common. Pet owners facing a natural disaster often have to compromise their own safety to make sure their furry friends are safe, according to the American Society for the Prevention of Cruelty to Animals.

Unfortunately, a new ASPCA study reports that many states and counties do not have adequate emergency response plans for the care of animals during a natural disaster.

Fewer than a third of U.S. counties that regularly face natural disasters have an animal response team in place to help address the needs of pets, farm animals and their owners in an emergency, said lead author Vic Spain, an epidemiologist and consultant for the ASPCA.

A significant number of counties also don't have plans in place for emergency shelters where people can either stay with their animals or shelter their animals elsewhere in the facility, the study found.

These plans can be the difference between life and death in an emergency, Spain said. About 56 percent of homes have at least one pet, and most people don't want to leave their furry family members behind.

"From previous studies, we know that people with pets are more likely than people without pets to refuse to evacuate in an emergency situation -- putting their lives, as well as the lives of the people sent to rescue them, in danger," Spain said.

Hudek and Clevinger decided a couple days before Irma struck Florida this week that they would ride out the storm at home. They were worried they would run out of gas while evacuating the state, and be trapped in their car with their cats.

But then Irma changed tracks. Instead of coming up Florida's east coast, it instead veered to the west coast. "We realized the storm tracker had Irma coming through our neighborhood as a category 4 hurricane," Hudek said.

The couple made arrangements to stay at a shelter in a nearby elementary school. On Sunday morning, as the storm began its march up Florida, they packed their cats into carriers and headed to the shelter.

Once in the shelter, they found that all the pets people brought were being put in one small room. Their cats would not be able to get out of their carriers to eat, drink or use the litter box, and they would be subjected to loud barking from stressed-out dogs.

"We thought we'd be able to stay with our cats and sleep with our cats, and that's just not how it is," Hudek said.

So the couple instead decided to stay at a friend's house, even though they were worried it would not be as safe as the shelter. They found an interior bathroom, and they and their pets huddled there until the storm's fury subsided.

They and their pets made it safely through the hurricane, but others in earlier storms were not as lucky.

More than 15,500 pets in New Orleans needed to be rescued after Hurricane Katrina hit in 2005, the ASPCA said. Four out of five of the animals were never reunited with their owners.

State and local governments have been urged in the years since Katrina to include animals in emergency planning, but Spain and his colleagues found serious gaps in response plans:

"Organizations at the county or city level are critical for emergency response to occur quickly enough to prevent animal emergencies," Spain said. "It is important to remove barriers to evacuation."

"In our experience with Hurricane Sandy, residents were more likely to comply with evacuation orders when pet friendly emergency shelters were available, their presence was known to local residents, and pet-friendly transportation to the shelters was offered," Spain continued, referring to the 2012 superstorm that ransacked the northeastern United States.

Why aren't better plans in place? In some cases, local emergency preparedness staff may not be aware of the need to include pets and livestock in their planning, Spain said.

Some counties also reported that they didn't have enough money to cover planning for animals in an emergency, Spain continued. Other locales may have become complacent because they've gone a long time without a disaster occurring in their area.

The Gulf Coast Humane Society is a part of Florida's animal response team network, and the help it provided pet owners prior to Irma revealed the value of planning, executive director Jennifer Galloway said.

Just before the storm, the Fort Meyers animal welfare organization made available 200 pet crates for anyone to take, whether or not they left a donation, Galloway said.

"They were gone within hours," Galloway said. "I think what people are seeing after Katrina and Harvey is they want to be with their pets. They want to keep their animals safe."

Although planning is important, Galloway isn't sure that the situation Hudek and Clevinger faced at their shelter can always be avoided.

"It's probably always going to be an issue, because at the last minute people are scrambling to open up shelters," Galloway said. "While it might not be ideal for cats and dogs to be in the same room, at least they're safe."

The ASPCA study appears in the Journal of Homeland Security and Emergency Management.