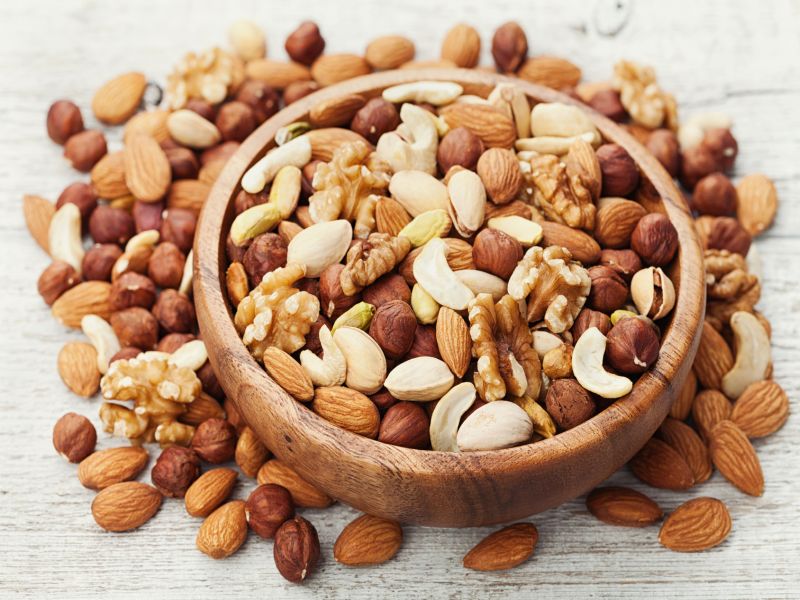 WEDNESDAY, May 17, 2017 (HealthDay News) -- Colon cancer patients might improve their chances of survival if they eat nuts along with an overall healthy diet and regular exercise, two new studies report.

In a seven-year study, patients successfully treated for stage 3 colon cancer who ate at least 2 ounces of nuts a week had a 42 percent lower chance of their cancer coming back and a 57 percent lower risk of dying from the disease.

Stage 3 means the cancer may have spread to surrounding tissues, but hasn't spread to distant organs.

These preliminary findings jibe with those of a second trial. That study found that colon cancer survivors with the highest healthy lifestyle scores -- eating right, exercising and maintaining a healthy weight -- had a 42 percent lower risk of death than those with the lowest scores.

Both studies are scheduled for presentation next month at the annual meeting of the American Society of Clinical Oncology (ASCO), in Chicago.

"Diet and lifestyle can influence both the risk of cancer coming back and can help you live longer," said ASCO President-Elect Dr. Bruce Johnson. He's chief clinical research officer at Dana-Farber Cancer Institute in Boston.

"Once you get cancer, it's not too late to adopt these," Johnson continued. "It makes a difference. A third of our cancer risk is related to things we can prevent."

The nut study was funded by the U.S. National Institutes of Health. It involved more than 800 patients who had received surgery and chemotherapy for their colon cancer. They all filled out diet questionnaires, including questions regarding the amount of nuts they ate. The patients were followed for about seven years after completing chemotherapy.

Nearly 1 in 5 patients (19 percent) said they ate at least 2 ounces of nuts a week, and researchers found both a lower risk of cancer recurrence and higher overall survival in that group.

However, this benefit was limited to tree nuts such as Brazil nuts, cashews, pecans, walnuts and pistachios, said lead researcher Dr. Temidayo Fadelu, a clinical fellow at Dana-Farber. Further analysis revealed that peanuts and peanut butter did not provide any benefit.

Peanuts actually fall within the legume category and are cousin to well-known legumes such as peas, beans and lentils, Fadelu noted.

"This difference [in benefit] may be due to the different biochemical composition between peanuts and tree nuts," Fadelu said.

Fadelu and his colleagues think that people who eat tree nuts might have lower blood sugar and lower levels of insulin, which could decrease their colon cancer risk.

The second study also focused on stage 3 colon cancer patients after chemotherapy. Researchers surveyed almost 1,000 patients about their lifestyles, scoring them against recommendations in the American Cancer Society's Nutrition and Physical Activity Guidelines for Cancer Survivors.

Half were followed up to seven years, and half longer.

People who stuck closely to the guidelines regarding exercise, diet and excess weight had a 42 percent lower risk of death than those who didn't, said lead researcher Erin Van Blarigan. She's an assistant professor of epidemiology and biostatistics at the University of California, San Francisco.

Patients should not read these studies and assume that they can avoid chemotherapy and instead treat their colon cancer with diet and exercise, warned ASCO President Dr. Daniel Hayes.

"That's a very dangerous interpretation, and that's not what we're trying to get across," said Hayes, who is clinical director of breast oncology at the University of Michigan Comprehensive Cancer Center. "Chemotherapy clearly saves lives."

While these studies can't prove a clear cause-and-effect relationship, Hayes noted both focused on patients involved in clinical trials for chemotherapy drugs.

Using clinical trial patients takes out a lot of the biases found in typical observational studies and "makes these findings even more compelling, in my opinion," Hayes said.

Data and conclusions presented at meetings should be considered preliminary until published in a peer-reviewed medical journal.

What are risk factors for developing colon cancer? See Answer