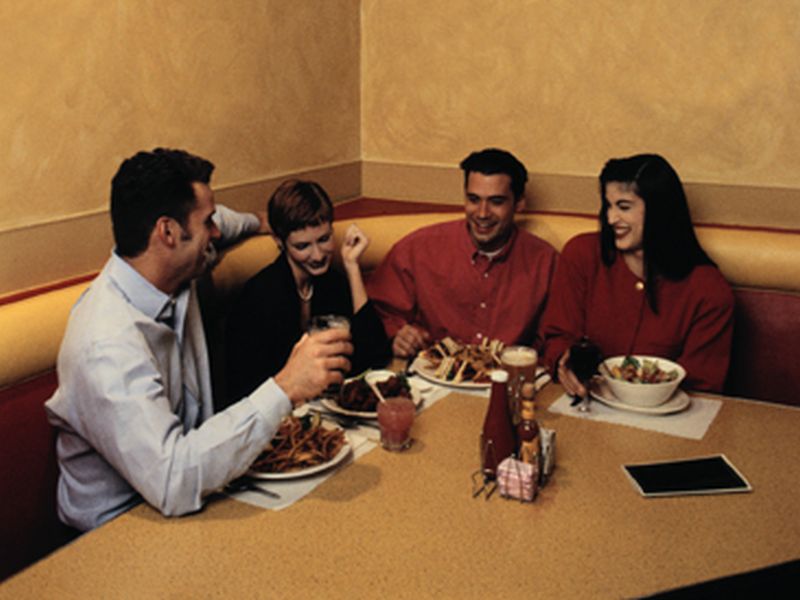 TUESDAY, March 7, 2017 (HealthDay News) -- Sticking to a diet is tough enough, but eating out with friends or family may up the odds of cheating by about 60 percent, a new study suggests.

"When you're in a restaurant, you're probably more vulnerable than you think you are," said study author Lora Burke, a professor of nursing at University of Pittsburgh.

"Whenever you're in a high-risk situation, you could easily eat beyond what you'd planned to," she added.

More than 70 percent of American adults over age 20 are overweight or obese, according to the U.S. Centers for Disease Control and Prevention. And an estimated 45 million Americans diet each year, according to Boston Medical Center's Nutrition and Weight Management Center.

In the study, Burke and her colleagues estimated both the rate of diet temptations and the probability a lapse would follow based on dieters' location -- such as home, a restaurant or workplace -- as well as whether they were alone or with others.

The researchers had 150 adults use a smartphone app to report when they felt temptation, and whether or not they succumbed to that temptation. Ninety percent of the volunteers were women. Eighty percent were white.

The study participants' average body mass index (BMI) was 34, putting them in the obese category. BMI is a rough measure of a person's body fat calculated with weight and height measurements. A BMI of 18.5 to 24.9 is considered normal. From 25 to 29.9 is overweight, and a BMI of 30 or over is considered obese.

Diet temptations were defined as eating a food or an amount of food inconsistent with a weight loss plan. Diet temptations occurred most often in a restaurant while eating with others or in sight of others who were eating, the study showed.

Temptations didn't occur as frequently in another person's home as in a restaurant. But there was still nearly a 65 percent likelihood of a diet lapse in someone else's house.

"They're probably paying more attention to the social situation and the conversation and not as much to what they're eating, so they eat more," said Penny Kris-Etherton. She's a registered dietician and professor of nutrition at Penn State University. She wasn't involved in the new research.

"I would never tell anybody not to go out and eat with friends," she added. "That's not the message -- friends are so important. But be mindful of what you're eating."

The odds of a diet lapse were lower in other locations, such as work (about 40 percent) and in a car (about 30 percent). But, the study participants cheated on their diets nearly half the time when alone as well.

Burke and Kris-Etherton both urged people to frame their healthier eating plans as a lifestyle rather than a diet. Changing that mindset, they agreed, can help ease the pressure to perfectly adhere to dietary goals.

"If you know you want to go out on Friday night, have less to eat on Thursday and Saturday," Burke suggested. "Bank your calories. You can take a break. It's about balance."

Mary Williams is a registered dietitian in the department of family and community medicine at Christiana Care Health System in Wilmington, Del. She noted that restaurant dining is more challenging for those aiming to cut calories when they don't arrive with a plan in mind.

"Many times people go into a restaurant and have never looked at the menu, so they don't have a game plan in mind," said Williams, who wasn't part of the new research. "I often tell our clients to review the menu beforehand so they have some idea of what to pick so they're not unduly influenced by everyone [else]."

Kris-Etherton said those trying to lose weight can still enjoy eating out with friends by making a few small tweaks that can save them from consuming too many calories.

"If everyone is ordering alcoholic beverages, don't order a Long Island iced tea, which can have 800 calories," she suggested. "Order a glass of wine or something with far fewer calories."

"Also, you don't need dessert, especially if you have an appetizer," Kris-Etherton added. "If everyone's ordering dessert, maybe split one and take a couple of bites."

The study was to be presented on Tuesday at an American Heart Association meeting in Portland, Ore. Research presented at scientific conferences typically hasn't been published or peer-reviewed, and results are considered preliminary.