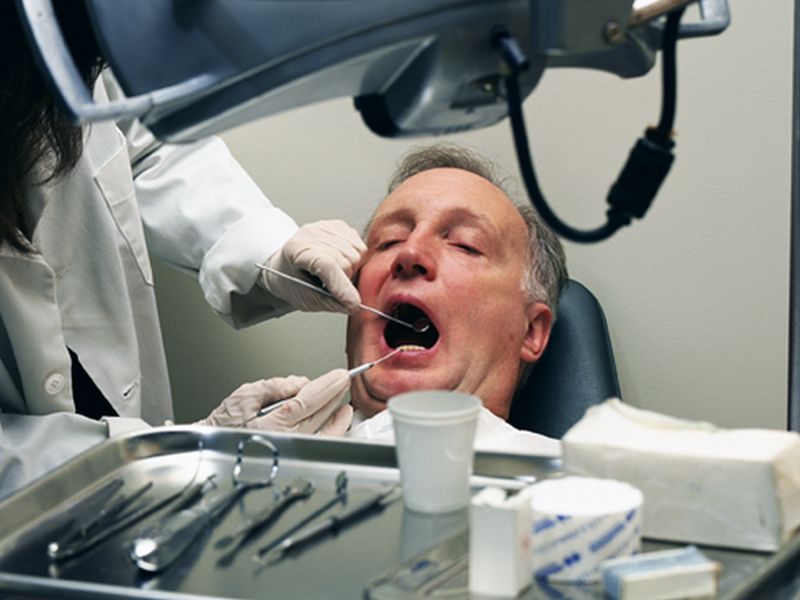 THURSDAY, Feb. 23, 2017 (HealthDay News) -- You'd probably be surprised if your dentist said you might have type 2 diabetes. But new research finds that severe gum disease may be a sign the illness is present and undiagnosed.

The study found that nearly one in five people with severe gum disease (periodontitis) had type 2 diabetes and didn't know it. The researchers said these findings suggest that the dentist's office may be a good place for a prediabetes or type 2 diabetes screening.

"Be aware that worsened oral health -- in particular, periodontitis -- can be a sign of an underlying [condition], such as diabetes," said study author Dr. Wijnand Teeuw. He's the chief of the periodontology clinic at the Academic Center for Dentistry Amsterdam in the Netherlands.

"Early diagnosis and treatment of both periodontitis and diabetes will benefit the patient by preventing further complications," Teeuw added.

Diabetes is a worldwide epidemic. In 2010, it was estimated that 285 million adults worldwide had diabetes. By 2030, that number is expected to rise to 552 million, according to the study authors. It's suspected that as many as one-third of people who have diabetes are unaware they have the disease.

Untreated, diabetes can lead to a number of serious complications, such as vision problems, serious kidney disease, heart trouble and infections that take a long time to heal, according to the American Diabetes Association.

Periodontitis -- an infection that causes inflammation of the gums and destruction of the bones that support the teeth -- is often considered a complication of diabetes, Teeuw said.

Dr. Sally Cram, a periodontist and a spokeswoman for the American Dental Association, said she sees what the study found in her practice every day.

"I see quite a few patients who don't know they have diabetes, and when they don't respond normally to periodontal therapy, I have to say, 'Go to your doctor and get tested for diabetes,'" she said.

And, on the other side, she explained that people with uncontrolled diabetes often see improvement when their gum disease is under control.

"People with diabetes aren't as able to fight inflammation and infection," Cram explained.

"People often come in with severe infections in the skin, and I think it's probably the same for infections in the mouth. People have been living for years with high blood sugar, and even if they go to the dentist, they don't get their blood sugar checked," Zonszein said.

"The relationship between diabetes and gum infections goes two ways. When you improve one, you also improve the other," he added. But it's not clear which comes first, and this study didn't prove a cause-and-effect relationship, only an association, Zonszein noted.

But the findings do show the importance of collaboration between health care providers, according to Zonszein, who is the director of the Clinical Diabetes Center at Montefiore Medical Center in New York City.

"Ninety-nine percent of dental problems and disease are preventable. Brush your teeth twice a day and floss once, and see your dentist periodically," she recommended.