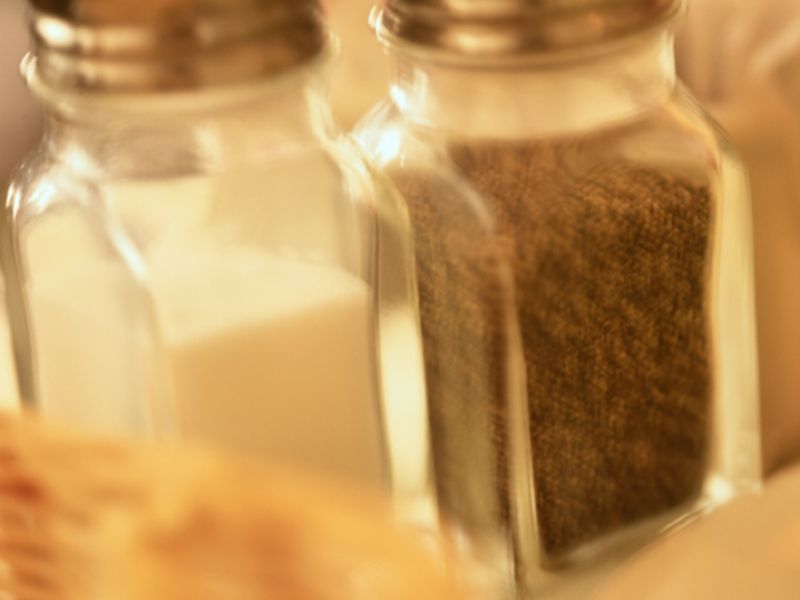 THURSDAY, Feb. 16, 2017 (HealthDay News) -- Encouraging people with kidney disease to reduce their salt intake may help improve blood pressure and cut excess fluid retention, at least for a while, a new study suggests.

Study participants lowered their systolic blood pressure (the top number) by almost 11 points, on average, on a salt-restricted diet versus their usual diet. They also flushed out a liter of water (about one-quart) from their bodies, on average, by slashing salt in their diets, researchers said.

Having high blood pressure and retaining excess salt and water in the body stresses the heart and blood vessels, explained lead author Dr. Rajiv Saran of the University of Michigan.

For kidney disease patients, high blood pressure (or "hypertension") and excess fluid in the body can be a toxic combination. "They die predominantly of cardiovascular disease," said Saran, a professor of internal medicine and epidemiology in the nephrology division.

Yet doctors rarely have time or make time to counsel each patient about salt-restricted diets, he said.

Saran and co-investigators wondered whether having trained dietitians talk to patients with chronic kidney disease by phone or in person about ways to lower daily sodium intake would make a difference.

Dr. Ebele Umeukeje is an instructor of medicine in the division of nephrology and hypertension at Vanderbilt University Medical Center in Nashville, Tenn.

"This study's findings highlight the impact of motivational interviewing on improving blood pressure control in patients with [chronic kidney disease], simply by increasing adherence to a salt-restricted diet," said Umeukeje, who was not involved in the study.

Saran suggested that with sustained improvements, "it's conceivable that you would not only reduce the long-term effects of blood pressure, but also you may in fact reduce progression of chronic kidney disease."

Pamela Kent, a registered dietitian, explained that motivational counseling is much like coaching.

It's "not telling patients" to do something; "it's really engaging the patient in order to change behavior," said Kent, who is with the Shaker Heights, Ohio-based Centers for Dialysis Care.

Fifty-eight adults with chronic kidney disease in Michigan and North Carolina participated in the study. Each was randomly assigned to follow a salt-restricted diet or their usual diet over a four-week period. Then, after a two-week hiatus, each patient switched to the other diet.

During the salt-restricted diet, the goal was to consume less than 2 grams (2,000 milligrams) of salt a day. (One teaspoon of salt contains 2,300 mg of sodium.) That target is based on published recommendations for people with high blood pressure. Adherence to the diet was assessed by measuring salt in the urine.

People on the salt-restricted diet weren't eating prepackaged low-salt meals. Rather, dietitians trained in motivational techniques counseled them on cutting salt in their diets and encouraged them to make lower-sodium choices.

Patients' blood pressure was measured at the start of the study and after each four-week phase. The researchers also used a technique called bioelectrical impedance to measure changes in body fluid. This simple test involves placing electrodes on the body and getting a readout. (It's not routinely used in clinics yet, but Saran believes this study may help demonstrate its value in kidney disease.)

During the study period, nearly 80 percent of participants reduced their sodium. And two-thirds reduced it by more than 20 percent, "which is quite big," Saran said. "But there was obviously a lot of variability, so some people reduced it more than others," he added.

Saran acknowledges that a longer, larger study is needed to show whether patients can sustain salt-restricted diets -- and improved blood pressure and fluid levels -- over time.

An estimated 26 million Americans -- one in nine -- have chronic kidney disease, according to the American Society of Nephrology.

The study findings were published online Feb. 16 in the Clinical Journal of the American Society of Nephrology.

The study was funded in part by the U.S. National Institutes of Health. Two of Saran's co-investigators reported holding stock in Fresenius Medical Care, a kidney dialysis company.