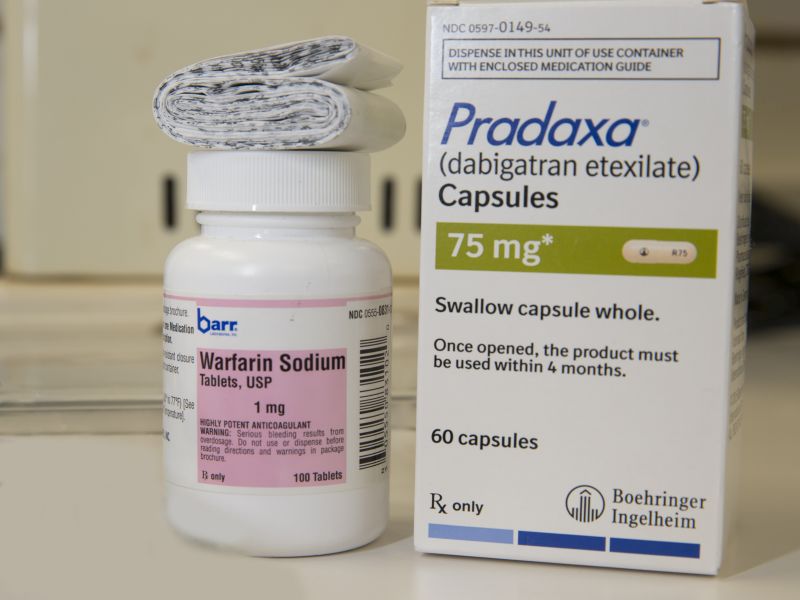 THURSDAY, Dec. 1, 2016 (HealthDay News) -- Use of a blood thinner is routine for many heart patients, but these drugs come with a risk of episodes of excess bleeding.

What, if any, anticoagulant (blood thinner) should these patients take after such episodes arise?

A new study suggests that the blood thinner Pradaxa (dabigatran) may be a better choice than the standby drug warfarin in these cases.

The reason: Pradaxa is less likely than warfarin to cause recurrent bleeding in patients who recently suffered a bleeding stroke or other major bleeding event, the researchers found.

"Our results should encourage clinicians to seriously consider resuming anticoagulation among patients who survived a major bleeding event, particularly if the source of bleeding was identified and addressed," said study senior author Dr. Samir Saba. He's associate chief of cardiology at the University of Pittsburgh Heart and Vascular Institute.

As Saba's team explained, both warfarin and Pradaxa are anticoagulants, often prescribed to prevent blood clots in people at risk for stroke or heart attack.

However, blood thinners also increase the risk of severe bleeding, such as in the brain or gut, because they decrease the blood's ability to clot.

To learn more about how best to treat patients on anticoagulants who suffer a major bleeding event, the researchers compared 2010-2012 data from nearly 90,000 patients who filled prescriptions for Pradaxa or warfarin.

More than 1,500 of the patients suffered a major bleeding event while taking the drugs, and about half of them resumed taking one of the two blood thinners a few months after the bleeding event.

Stopping blood thinner use altogether was clearly the less-safe option, the study found. For example, the risk of death from any cause, or of having a stroke, was 23 to 34 percent higher in patients who stopped taking anticoagulants altogether, compared to those who resumed taking the drugs.

And Pradaxa seemed to beat out warfarin in terms of safety, the Pittsburgh group found. People who took Pradaxa after their bleeding event were nearly half as likely to have another major bleeding event within one year compared to those who took warfarin.

Two specialists who reviewed the findings said that decisions like these are always difficult.

"Both patients and physicians are reluctant to resume blood thinners once there has been a bleeding complication," said Dr. Kevin Marzo, chief of cardiology at Winthrop-University Hospital in Mineola, N.Y.

He said the new study supports the notion, however, that resuming a blood thinner after a bleeding episode is still the safest path for most patients. "This finding could ease some of the anxiety in reinitiating blood thinners," Marzo said.

Dr. Richard Libman is vice chair of neurology at Long Island Jewish Medical Center in New Hyde Park, N.Y. He said the new research echoes results of prior studies that had suggested Pradaxa had a slight advantage over warfarin in these scenarios.

But he also stressed that the new study was "observational" -- not the "gold standard" prospective, randomized trial, so firm conclusions can't be made.

The study was published Dec. 1 in the journal Stroke.

DVT in Pictures: Symptoms of Deep Vein Thrombosis, Beyond Leg Pain and More

A painful, swollen leg may be one sign of a dangerous clot. WebMD's slideshow explains the symptoms, treatments, and prevention of deep vein thrombosis (DVT).