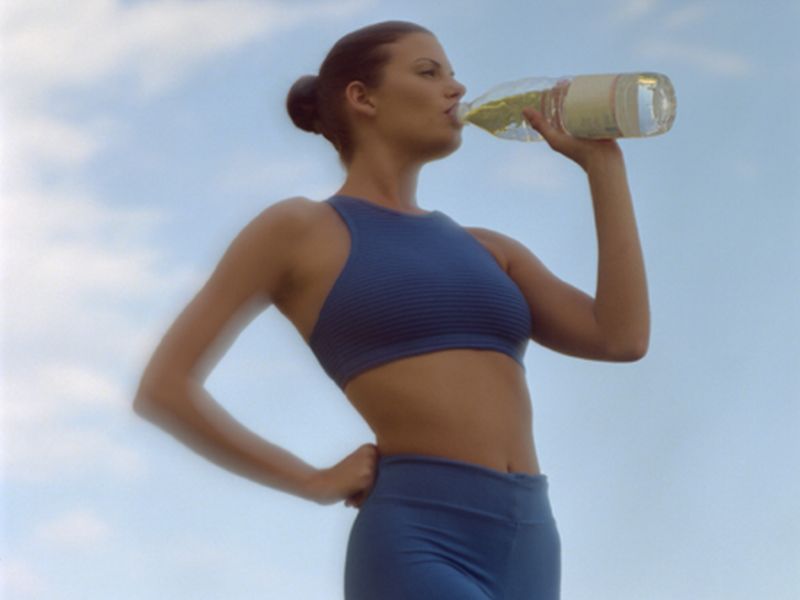 THURSDAY, Nov. 3, 2016 (HealthDay News) -- Dehydration is a familiar foe for endurance athletes, and one that will be on the minds of every participant in Sunday's New York City Marathon.

But did you know that drinking too much water can be potentially fatal, particularly if not treated properly?

And you don't have to be an elite athlete like a marathoner to fall victim to what doctors call water intoxication.

Water intoxication occurs when a person has consumed so much water that the salt levels in the blood become diluted, said Dr. Aaron Baggish, co-medical director of the Boston Marathon.

"When sodium [salt] concentrations are low in the blood, it actually allows water to leak out of the blood into the other tissues," a condition known as hyponatremia, added Baggish, who's also associate director of the Cardiovascular Performance Program at the Massachusetts General Hospital Heart Center.

The brain appears to be the organ most affected by hyponatremia, and begins to swell as water leaks out of blood and into brain cells, he said.

Usually, the symptoms are mild, such as confusion, headache and nausea. But if left untreated, people might wind up suffering seizures, Baggish said.

In the worst cases, the brain continues to swell uncontrollably, resulting in a potentially fatal condition called brain stem herniation, he said.

"The brain is soft tissue that's contained in a fixed skull. When the brain swells, there's only one real way it can go as an exit path, and that's down to the bottom of the skull where there's a hole that connects the brain to the spinal cord," Baggish said.

Death from water intoxication is very rare among athletes like marathon runners, said Dr. William Roberts, a former president of the American College of Sports Medicine.

"We've noted maybe a half dozen deaths out of probably 3 or 4 million finishers, so it's not a very common cause of fatality," said Roberts, who's also a professor with the University of Minnesota's Department of Family Medicine and Community Health. Marathon runners are more likely to die from a heart attack or heat stroke, he said.

Sports medicine doctors are much more likely to see cases of water intoxication or hyponatremia than family practitioners, Baggish said.

"If you're in a marathon tent or an Ironman tent, you may see a fair bit of it," he said. "If you're in a routine office practice, it won't come across your radar screen. But, anyone who works with athletes in the context of long-distance endurance sports will see it from time to time."

But endurance athletes aren't the only ones at risk of water intoxication.

Earlier this year, a 27-year-old man named Andrew Schlater died from hyponatremia while in the midst of a liquid cleanse, or detoxification, without medical supervision, said his father, Frank Schlater of Rowayton, Conn.

For a number of days, Schlater's parents had noticed him drinking a lot more water than usual. Andrew seemed fine, and shrugged off his parents' requests to stop drinking so much water.

But, early one morning in July, Frank Schlater found his son in the family's kitchen, sipping some water. Within minutes, Andrew collapsed on the floor. He was rushed to the hospital but died several hours later, due to brain herniation.

"You just can't imagine water would hurt you," Frank Schlater said. "You hear that too much water can be bad for you, but you don't know how to weigh that."

Others at risk of hyponatremia: Older people who take diuretics and have reduced kidney function, said Roberts.

Marathoners most at risk of water intoxication tend to be those out on the course for longer periods of time, Roberts noted.

"Slower runners have more time to drink water," he said. "If you're out there for six hours, walking through water stops and drinking more than you need, you could end up in this situation."

Taking in salt or sodium during a race can help reduce the risk of hyponatremia, said Dr. Robert Glatter, an emergency physician with Lenox Hill Hospital in New York City. For example, athletes can consume sports drinks containing electrolytes, he said.

And what about the non-endurance athlete. How much water does the average person need each day?

There's no one-size-fits-all rule. But, the Institute of Medicine recommends that men consume approximately 13 cups (3 liters) of fluids a day. For women, the recommendation is about 9 cups (2.2 liters).

But, the Mayo Clinic notes that it's best to think in terms of "fluid" consumption each day, not "water" consumption, because all fluids count toward the daily total, as do fluids found in foods.