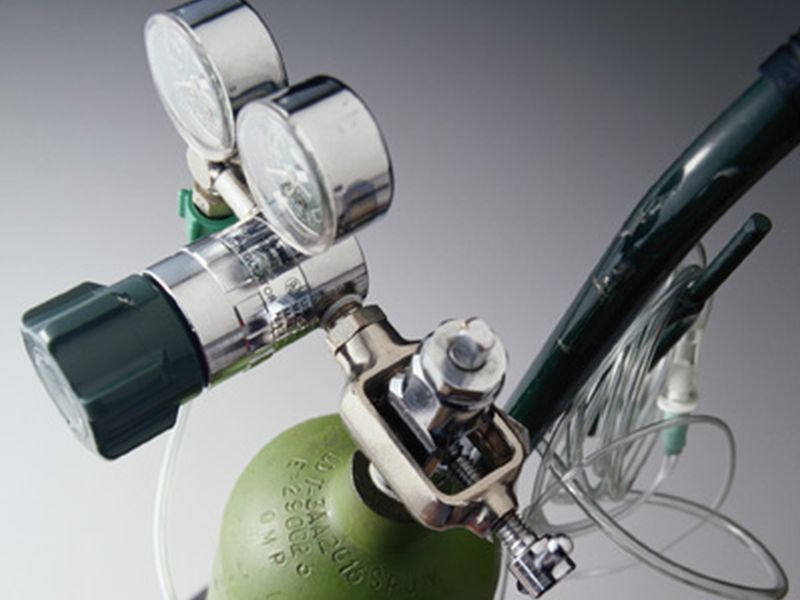 COPD is an umbrella term for the lung diseases chronic bronchitis and emphysema. The study findings could change clinical practice, the researchers added.

In 2014, close to 16 million Americans said they'd been diagnosed with COPD, according to the U.S. Centers for Disease Control and Prevention. The disease stands as the third-leading cause of death in the United States.

One common treatment for COPD is supplemental oxygen -- with both portable and at-home devices.

The therapy has been proven to prolong the lives of COPD patients with severe decreases in their blood oxygen levels, said study corresponding author Dr. Robert Wise.

What's been unclear, he said, is whether it benefits patients with moderately low oxygen levels -- either when they're at rest or when they exert themselves.

The study findings were published Oct. 27 in the New England Journal of Medicine.

"No one has really known," agreed Dr. Magnus Ekstrom, a respiratory medicine specialist at Lund University in Sweden. "During all this time, and despite the fact that we are talking about something as basic and common in everyday respiratory practice as supplemental oxygen."

Ekstrom, who wrote an editorial published with the new study, said the findings are something doctors and COPD patients should discuss.

For the study, Wise and his colleagues randomly assigned 738 COPD patients to receive supplemental oxygen or not. All of the patients had moderately low oxygen levels in their blood -- either persistently or when they were physically active.

Over the next six years, there was no evidence that the oxygen-therapy group fared any better.

It did not improve patients' quality of life, forestall hospitalization or lengthen their lives, the researchers found.

Why? It's not clear from this study, according to Wise, a professor of medicine at the Johns Hopkins University School of Medicine's Division of Pulmonary and Critical Care Medicine in Baltimore.

But, he said, it appears that the harmful effects of low blood oxygen may only arise at a certain threshold. So COPD patients with moderately low levels may not have much to gain from supplemental oxygen.

Still, Wise stressed that the results do not mean oxygen therapy is useless.

It does help patients with more severe oxygen deficits, he said -- and some people with moderately low levels may benefit, too.

Patients like those, he said, should not feel compelled to stop, based on the new findings.

"But if you're not receiving symptomatic benefit, talk to your doctor," Wise suggested. "Doctors and patients now have this important new evidence to use in discussing the therapy."

Besides the lack of benefit for some patients, oxygen therapy also has downsides, Wise pointed out.

For the most part, it's safe, he said. But patients can trip over the equipment, which is especially dangerous for elderly, frail people. And because oxygen feeds combustion, it has the potential to contribute to fires.

In this trial, two patients had to be hospitalized after tripping over their oxygen equipment, and five patients reported fires or burns.

There's also the cost. In recent years, Medicare has paid more than $2 billion annually toward oxygen therapy, according to the U.S. Government Accountability Office. But patients still have to foot 20 percent of the payment.

Ekstrom agreed that doctors and patients have to talk about all the pros and cons of oxygen therapy.

And that, he said, can also apply to people who started oxygen because of severe hypoxemia.

Over time, Ekstrom said, some patients see their COPD improve -- especially if they began oxygen because of an infection or exacerbation of the disease.

"The benefit of oxygen [for them] could be evaluated through a walk test," Ekstrom said. The standard six-minute walk test measures how much distance a patient can walk in that time.

Both he and Wise stressed another point: There are other treatments for COPD -- including medications and pulmonary rehabilitation programs, which may include exercise, nutrition counseling and help with symptom management.

"This study does not imply there's nothing we can do," Wise said. "COPD is preventable and treatable."