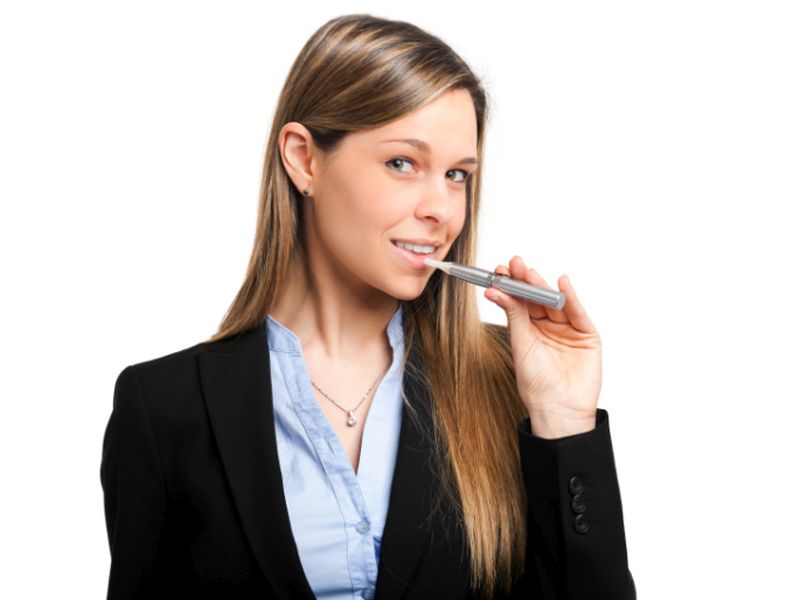 MONDAY, Aug. 8, 2016 (HealthDay News) -- Teenagers try e-cigarettes the first time for very teen-related reasons -- they're curious, friends use them, and there are lots of different flavors that taste good.

But the teens most likely to keep using e-cigarettes do so for very practical reasons, a new study suggests.

The low cost of the devices and the promise they can help teens quit smoking tobacco are the two strong predictors of continued use, said senior researcher Suchitra Krishnan-Sarin. She is a professor of psychiatry at Yale University School of Medicine in New Haven, Conn.

Teens who initially tried e-cigarettes because of their low cost had significantly stepped up their use of e-cigarettes by the time researchers checked in six months later.

In addition, teens who tried e-cigarettes to quit smoking were more than 14 times more likely to keep using e-cigarettes than those who did not consider this a reason to try the devices, the findings showed.

"Even though they said they were using e-cigarettes to quit smoking, it doesn't appear to have necessarily helped them," Krishnan-Sarin said.

E-cigarettes don't produce tobacco smoke, but they do contain nicotine. And researchers fear they'll create a new generation of smokers, with kids hooked on nicotine turning to tobacco for a stronger fix, Krishnan-Sarin said.

"That is the huge public health debate," she said. "Are kids going to start with e-cigarettes and then move on to cigarettes? Is that going to be the start of nicotine addiction?"

For their study, Krishnan-Sarin and her colleagues surveyed 340 e-cigarette users in two middle schools and three high schools in 2013, asking them why they first tried e-cigarettes.

The most cited reasons for first trying e-cigarettes were curiosity (57 percent), good flavors (42 percent), use by friends (33 percent), healthier than cigarettes (26 percent), can be used anywhere (21 percent) and does not smell bad (21 percent).

Researchers revisited the teenagers six months later and asked if they were still using e-cigarettes, and if so, what were the reasons they'd kept vaping. The investigators compared the reasons for continued use against those given for first use.

Kids who cited the low cost of e-cigarettes or their potential help to quit smoking wound up vaping more days on average than those who cited other reasons, the study authors said.

Teens who cited low cost used e-cigarettes two out of every three days during the previous month, and those who wanted to quit smoking wound up vaping nearly that often, according to the study results.

Other reasons also predicted continued use of e-cigarettes: they don't smell bad; they come in good flavors; friends use them; they can be used anywhere; they can be hidden from adults; and they are healthier than tobacco.

But for kids who kept using e-cigarettes, "the most robust predictors were the low cost and trying e-cigarettes to quit smoking," said lead researcher Krysten Bold, a postdoctoral fellow in psychiatry at Yale School of Medicine.

"For example, we found cost was an issue," she said. "Increasing the cost of e-cigarettes is something that could reduce use of e-cigarettes in this young age group." States could tax the devices, hiking their prices, she suggested.

Federal officials also could ban the use of flavors in e-cigarettes, as has already been done in traditional cigarettes except for menthol, said Dr. Norman Edelman, senior scientific advisor for the American Lung Association.

The U.S. Food and Drug Administration in May announced regulations that would ban sales of e-cigarettes to anyone younger than 18 and require strict regulation of the devices. Those regulations take effect Aug. 8.

The regulations also require photo IDs to buy e-cigarettes, and ban retailers from handing out free samples or selling them in all-ages vending machines.

"Despite recommendations from the American Lung Association and others, the final rule did not ban flavorings as they have in ordinary cigarettes," Edelman said. "We continue to believe all the measures that have been applied against ordinary cigarettes should be applied to e-cigarettes."

The study was published online Aug. 8 in the journal Pediatrics.

In response to the study, the e-cigarette industry group the American Vaping Association said this new research "adds to the growing body of evidence that youth smokers and those seeking to quit smoking are much more likely than nonsmokers to use vapor products beyond mere experimentation. The fact that 20 percent of those who reported using vaping to quit smoking succeeded should be looked at positively, as pharmaceutical nicotine replacement therapy products have been repeatedly shown to have pathetic success rates."