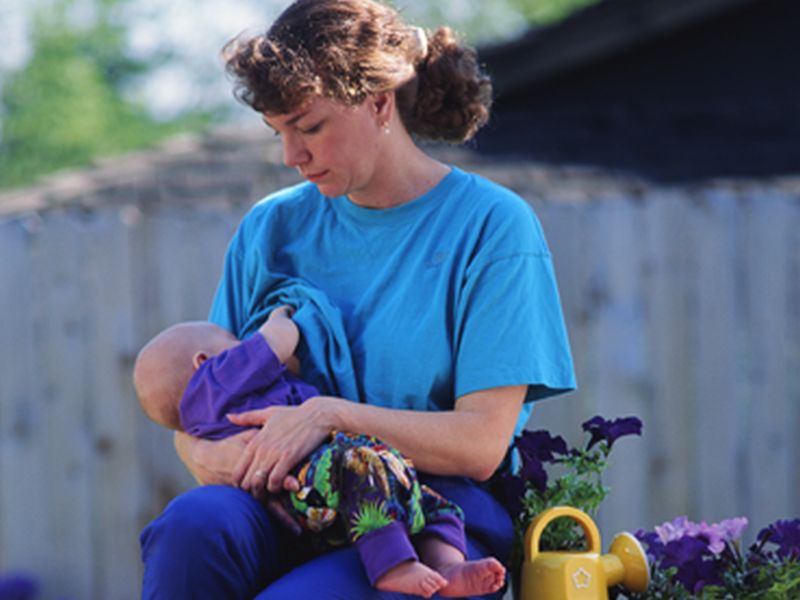 MONDAY, June 13, 2016 (HealthDay News) -- Early use of antibiotics may dampen some of the benefits of breast-feeding, a new study suggests.

Researchers found that babies who were prescribed antibiotics while they were breast-feeding or shortly afterward were prone to infections and obesity.

"In breast milk, unlike in formula milk, the infant receives bacteria from the mother and specific sugar components that promote the growth of certain [gut] bacteria," explained lead researcher Katri Korpela, from the immunobiology research program at the University of Helsinki in Finland.

The finding indicates that the health benefits of breast-feeding are largely due to how it helps a baby develop intestinal bacteria (microbiota), and that antibiotics disturb that development, she said.

However, the study could not prove a cause-and-effect relationship between early antibiotic use and infections and obesity, Korpela said.

"Early use of antibiotics unfavorably modifies intestinal microflora [gut bacteria], and this may have lifetime consequences, even in those babies who receive a long duration breast-feeding," said Dr. Pietro Vajro, a professor of pediatric gastroenterology at the University of Salerno in Italy. He co-authored an editorial that accompanied the study.

Intestinal bacteria may affect the development of obesity because they regulate the production of fatty acids that influence the secretion of molecules that determine the way the gut handles food and feelings of fullness, Vajro said.

"Such dysfunction may cause a chronic inflammation in the bloodstream that is characteristic not only of obesity, but also of a number of obesity-related conditions, such as fatty liver disease and metabolic syndrome," Vajro said.

In the study, Korpela and her colleagues collected data on 226 Finnish children who had taken part in a probiotic trial from 2009 to 2010. The children's mothers answered questions about breast-feeding, and antibiotic use was gleaned from purchase records.

Nearly 97 percent of the babies were breast-fed for at least a month, and the overall average breast-feeding period was eight months.

The researchers found that among the 113 babies who weren't given antibiotics before weaning, breast-feeding was linked to fewer infections after weaning and lower weights as kids. In fact, for each month of breast-feeding, the use of antibiotics was cut by 5 percent.

Among the 113 infants given antibiotics during breast-feeding and within four months after weaning, there were more infections and the children were more likely to be overweight.

The report was published online June 13 in the journal JAMA Pediatrics.

"It's well known that breast-fed babies will always do better in fighting infection because of the immunity offered in mother's milk," said Dr. William Muinos, a pediatric gastroenterologist at Nicklaus Children's Hospital in Miami.

Antibiotics kill the bacteria in the gut, he said. "If you are not breast-fed, you are not introducing the healthy [probiotic] bacteria," Muinos said.

He cautioned that antibiotics should not be given to infants for every fever or infection. "You should not use antibiotics on viral infections, where they are useless," he said.

Muinos said he wasn't convinced the connection between breast-feeding and the prevention of obesity is due to healthy gut bacteria. Instead, he thinks breast-feeding may delay the introduction of foods that are linked to obesity.

"Breast-feeding prevents the early introduction of highly rich carbohydrate meals, like cereals and fruit compotes, that can make a toddler obese," he said.