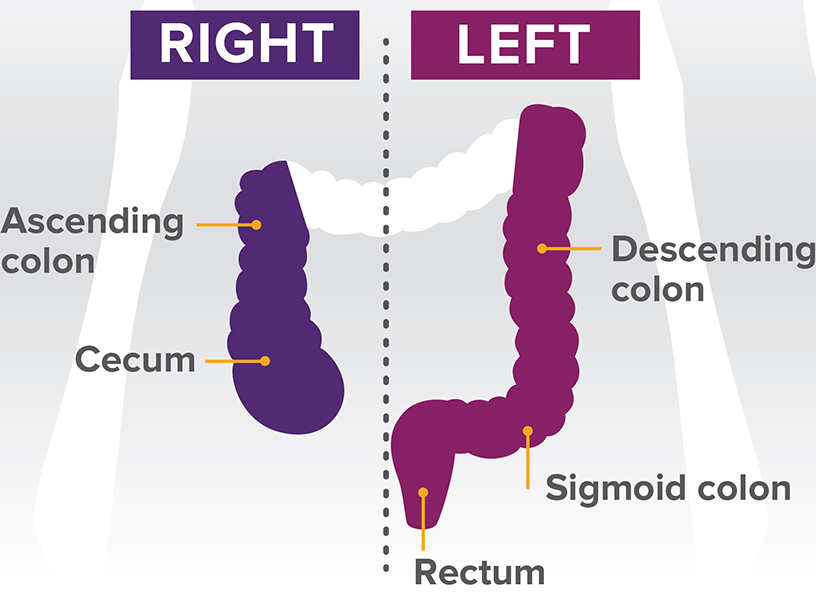 WEDNESDAY, May 18, 2016 (HealthDay News) -- Your survival odds against colon cancer may depend on which side of your colon the tumor develops, new research contends.

"It's a stunning and surprising finding, and the difference is dramatic," said lead researcher Dr. Alan Venook, a professor of medicine at the University of California, San Francisco.

"We thought of the colon as a tube that propelled stool out of the body, but it's not that simple," Venook said. "Each side of the colon starts in a different place, which is why the cancers are biologically different.

"We don't have just colon cancer, but varieties of colon cancer, and some have better prognosis than others," Venook added. "The bad ones tend to be on the right side of the colon and the better ones are on the left side."

The researchers also found that patients with tumors on the left side of the colon lived an average of 36 months after the chemotherapy drug cetuximab (Erbitux) was added to their treatment. However, patients treated with cetuximab whose tumor was on the right side of the colon survived a little less than 17 months.

In the future, this finding will lead to different treatment, depending on which side of the colon the cancer is on, Venook predicted.

"Right now, we don't know the biology, we just know there is something we need to figure out," he added.

"Now that we are aware of this, there's a whole lot more to learn and a lot of digging to do," Venook said. "People don't just have colon cancer, they have a particular brand of colon cancer, much as we see with breast cancer."

The findings were released Wednesday during a media briefing that previewed some of the research to be presented in June at the American Society of Clinical Oncology annual meeting in Chicago. Research presented at meetings should be considered preliminary until published in a peer-reviewed medical journal.

One expert was surprised by the finding.

"I would have never thought that the location of the cancer should have any bearing on how people deal with treatment," said Dr. Arun Swaminath, director of the inflammatory bowel disease program at Lenox Hill Hospital in New York City.

Only a colonoscopy can find cancer and pre-cancer on either side of the colon, he said. The goal of colon cancer screening is to find cancer before it spreads and remove it.

"Having metastatic [spreading] colon cancer is terrible, regardless of whether it's right- or left-sided, Swaminath said. "So, everyone over 50 should have a colonoscopy to decrease the risk of developing cancer."