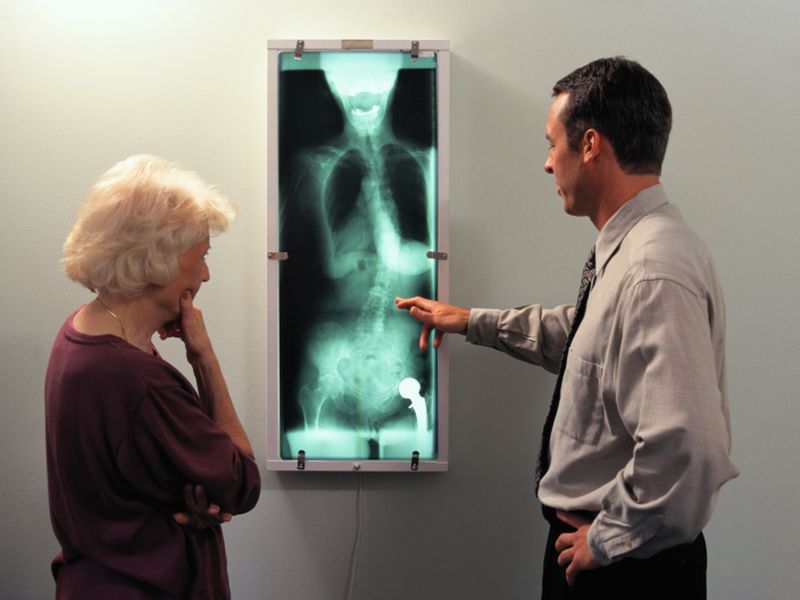 WEDNESDAY, Dec. 23, 2015 (HealthDay News) -- A drug recently approved for the skin condition psoriasis may also help people with a debilitating form of arthritis that attacks the spine, a new clinical trial finds.

The condition, called ankylosing spondylitis, causes inflammation around the vertebrae, which can lead to chronic pain and stiffness in the back and neck -- and, in some people, eventually cause some vertebrae to fuse into an immobile position.

In the new trial, researchers found that a drug called secukinumab (Cosentyx) helped control symptoms in 61 percent of spondylitis patients who were given the highest dose.

Experts said the results, published Dec. 24 in the New England Journal of Medicine, could open up a new option for managing spondylitis.

And new options are needed, said Dr. Scott Zashin, a fellow with the American College of Rheumatology who was not involved in the study.

"Currently, there are two classes of medications used to treat [spondylitis]," Zashin said.

Namely, they are nonsteroidal anti-inflammatory drugs (NSAIDs), such as prescription-strength ibuprofen and naproxen; and drugs called TNF-blockers, which include Humira, Remicade and Enbrel.

For some patients, Zashin said, those medications are enough. But others get no benefit.

Cosentyx, which is taken by injection, works differently from TNF-blockers, Zashin explained. Both drugs block part of the immune system's inflammatory response, but they have different targets: Cosentyx inhibits a protein called IL-17, which tends to be elevated in people with spondylitis.

So, Zashin said, that "unique mechanism of action" could offer an alternative to spondylitis patients who don't respond to standard therapy.

Almost 3 million Americans have ankylosing spondylitis, according to the U.S. Centers for Disease Control and Prevention. The disease is usually diagnosed in young people, before the age of 40.

The exact cause is unknown, but spondylitis does involve abnormal immune system activity that triggers chronic inflammation in the spine. A few gene variants have been linked to an increased risk of the disease -- and it's thought that some mix of genes and environment is to blame, according to the Spondylitis Association of America.

One theory, the association says, is that spondylitis arises when the defenses of the intestines start breaking down, and bacteria escape into the area of the sacroiliac joints. Those are the joints where the base of the spine meets the pelvis, and where people with spondylitis commonly have pain.

That theory stems, in part, from studies that have linked frequent gastrointestinal infections to a heightened risk of spondylitis.

While anti-TNF drugs do help many people with spondylitis, about one-third of patients "do not respond at all," said lead researcher Dr. Dominique Baeten, a professor at the University of Amsterdam, in the Netherlands.

Plus, he said, TNF-blockers reduce inflammation, but do not halt the progress of structural damage to the spine. There is preliminary evidence that Cosentyx might, Baeten said.

Earlier this year, the U.S. Food and Drug Administration approved Cosentyx for treating psoriasis -- an inflammatory skin condition that is also caused by abnormal immune activity.

The FDA has not yet OK'd the drug for ankylosing spondylitis. But European regulators approved it for that indication last month.

The current study, which was funded by Cosentyx maker Novartis, involved 590 adults with ankylosing spondylitis from around the world.

The patients were randomly assigned to receive one of two doses of the drug, or a placebo. For the first few weeks, the Cosentyx patients either took a weekly injection, or had three infusions of the drug; after that, they had one injection every four weeks.

Four months in, 61 percent of patients on the higher drug dose -- 150 milligrams -- had responded to the treatment. That meant they'd had at least a 20 percent improvement in how they rated problems such as back pain, morning stiffness and difficulty with daily activities.

The improvements were still apparent after one year, Baeten said.

"This drug means new hope for patients with ankylosing spondylitis, as we now have not only more therapeutic options, but also a good option for patients who've failed a TNF-blocker," Baeten said.

There can be side effects: Since the drug affects the immune system, infections are a potential risk. In this study, Cosentyx patients tended to get more infections, including yeast infections, than patients on the placebo.

Zashin saw the results as encouraging for spondylitis patients who are not getting relief from current treatments. "There is an entirely new class of drugs on the horizon that might be of benefit for them," he said.