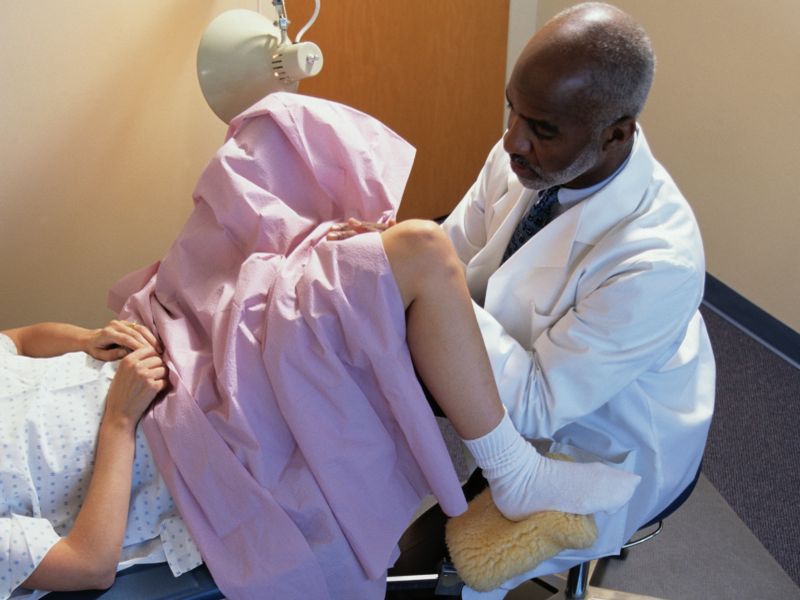 The rule, which took hold in September 2010, ensures that adults aged 19 to 25 have the option of remaining on their parents' health insurance.

No similar shift in cervical cancer diagnosis was seen among 26- to 34-year-olds, whose insurance coverage was unaffected by the rule.

Researchers said they can't be sure that the credit should go to the rule, one of the least controversial aspects of what's known to some as "Obamacare."

The study, published Nov. 24 in the Journal of the American Medical Association, did not look directly at young women's screening rates.

But other studies have found evidence that young U.S. adults now have better access to health care.

The study found that among 18- to 25-year-olds with mental health symptoms, the number seeking treatment rose after the dependent-coverage rule went into effect. That was in contrast to people aged 26 to 35, whose treatment rates dipped.

"I think at this point, we know that the dependent-coverage provision has increased young adults' access to care," Saloner said.

"But what we really want to know," he added, "is whether this surge in the number of people going to the doctor's office actually improves their health."

So the new study is "pretty exciting," Saloner said, in that it measured an objective health outcome.

For the study, Han's team used a national database that captures about 70 percent of all cancer cases in the United States each year. They looked at cervical cancer diagnoses among women aged 21 to 34, both before and after the dependent-coverage rule went into effect.

Among 21- to 25-year-olds, the study found, the proportion of women diagnosed with early stage cancer grew after the provision took hold: From 2007 to 2009, early stage tumors accounted for 68 percent of all cervical cancers; by 2011, that proportion had grown to 84 percent.

Saloner said that's plausible. But he also stressed that the limitation of this study -- and his own -- is that it can't discount the role of other shifts in health care and insurance coverage.

"It's always possible that trends other than the ACA [Affordable Care Act] provision influenced this," Saloner said.

In fact, the study did find a trend that seemed to be, at least in part, independent of the ACA provision: Over time, more young women were receiving fertility-sparing treatment -- such as less-extensive surgery -- for their cervical cancer.

That upward trend was already happening between 2007 and 2009, Han pointed out. She said she suspects that the continuing increase post-ACA probably reflects two things: advances in cervical cancer treatment and the rising rate of early stage diagnoses.

For young women, Han said the most important thing is to be aware that Pap tests are recommended starting at age 21.

And, owing to another ACA provision, there are no copays. "So now it's cost-free," Han said. "That removes another potential barrier."