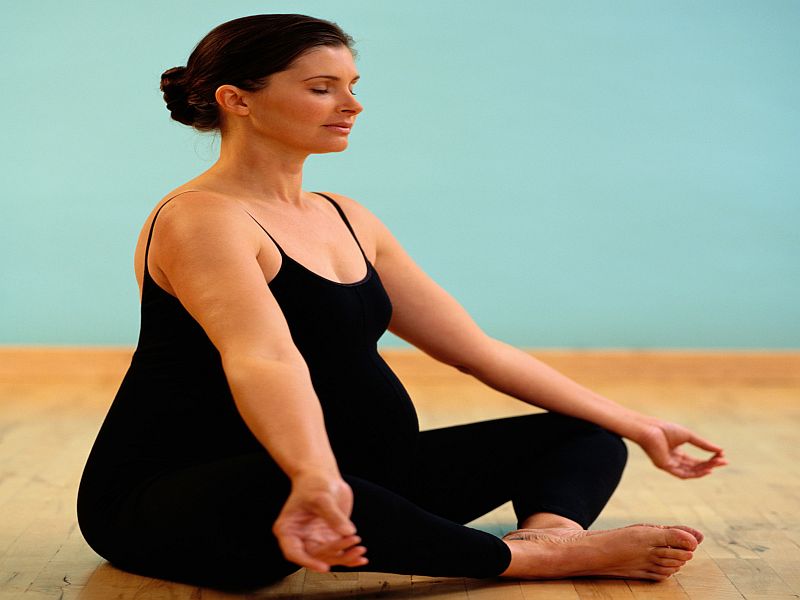 WEDNESDAY, Nov. 11, 2015 (HealthDay News) -- Yoga, even late into pregnancy, appears to be safe for expectant moms, according to a small new study.

The research found that yoga poses don't seem to place undue stress on mom or baby. Using real-time measurements, researchers showed that various yoga postures had no ill effects on heart rate, blood pressure or other vital signs -- for the mother-to-be or the fetus.

Researchers said the findings, reported in the December issue of Obstetrics & Gynecology, offer reassurance that the sometimes exotic-looking poses in a yoga class are generally safe for pregnant women.

The caveat is that modifications are often needed, said lead researcher Dr. Rachael Polis, who conducted the study while an obstetrics and gynecology resident at Jersey Shore University Medical Center, in Neptune, N.J.

The women in the study used blocks, chairs and the wall for support and balance. And no one is suggesting that a woman in her third trimester step into an advanced yoga class where people are kicking into handstands, Polis said.

But a prenatal yoga class, or a basic-level class that moves at a moderate pace, are good ways for pregnant women to exercise and de-stress, said Dr. Fahimeh Sasan, an assistant professor of obstetrics, gynecology and reproductive science at Mount Sinai's Icahn School of Medicine, in New York City.

"In a healthy pregnancy, we encourage all kinds of moderate activity," said Sasan, who was not involved with the new study. "I think these findings help validate what we've been telling women."

Yoga is becoming increasingly popular in the United States, Polis pointed out. One recent survey found that in 2012, over 20 million Americans were practicing yoga, the researchers said. And that includes pregnant women.

"But there's been limited research on the safety of yoga during pregnancy," said Polis, who is now a gynecology specialist at Kosair Children's Hospital in Louisville, Ky.

To dig a little deeper, she and her colleagues recruited 25 healthy women who were between the 35th and 38th weeks of pregnancy. Some regularly practiced yoga, some had a little experience, and some were novices.

The researchers had each woman take a one-on-one session with a yoga teacher, where they practiced 26 different postures. All the while, monitors kept track of the women's vitals, including heart rate, blood oxygen levels and uterine contractions.

The postures ranged from standing poses (including one-legged balances), to downward-facing dog, to seated and reclined poses. In the end, none of the postures caused worrisome changes in any of the women's vital signs. Fetal heart rates also stayed in the normal range.

A few of the women had sore muscles the next day, Polis said. But there were no falls or injuries.

Still, both Polis and Sasan said, pregnant women who are new to yoga should be aware that there are different forms of the practice -- some of which may not be appropriate for them.

"No 'hot yoga' during pregnancy," Sasan said, referring to a form of yoga where the practice rooms are heated to anywhere from 90 to 105 degrees Fahrenheit.

"It's OK for pregnant women to break a sweat," Sasan noted. "But you want to avoid becoming overheated. Pregnancy is not the time to push yourself."

That said, Sasan added, moderate exercise can help women avoid excessive weight gain as their pregnancy progresses. And if yoga helps them find some calmness, that's also a good thing.

"Anything that helps you reduce your stress levels is good," she said.

Pregnant women should consult their physician before beginning any exercise routine.